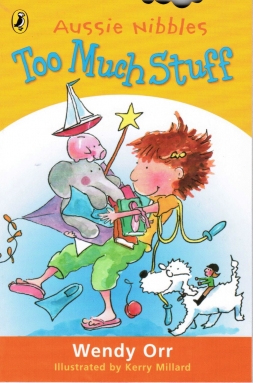 Becky plans to put on a puppet show in her living room to entertain her cousin Wesley. It’s a version of Beauty and the Beast, with music! Hoping for a bigger audience she advertises her show on the telegraphe pole outside. Mum isn’t very pleased when strangers turn up. And at the end of the performance Becky’s surprise twist terrifies her litle brother Ed, who starts to cry. But at the end of the day Becky gets spooked and Ed gets the last laugh.

The box was longer than Cassidy could spread her arms, and half as wide. It was so heavy she could hardly lift one corner.
There were five flat cardboard boxes inside. On top was a picture of a desk.
Cassidy had wanted a desk since the very first day of school. She had stories to write, pictures to draw and paintings to paint. She needed a desk!
This one had four drawers on one side and a cupboard with two shelves on the other. It was going to be perfect …
… when it was built.
‘We’ll build it in two ticks,’ said Dad. ‘Easy-peasy.’
Then he looked at Cassidy’s bedroom.
Stuff was heaped on her bed, dumped on her bookcase and piled on the floor. There were clothes, books, games, paintings, papers and science projects.
‘It won’t fit!’ said Dad. ‘There’s too much stuff!’
‘But …’ Cassidy began.
‘Just as soon as your room is tidy,’ said Dad, ‘we’ll build your desk.’

ABOUT WRITING THE BOOK:

I’ve been writing books at messy desks in messy rooms since I was seven. When I heard about a friend who took three days and an auction to tidy up her room so that her dad could fit in her new desk, I knew exactly how she felt. I also knew it had to be a book!