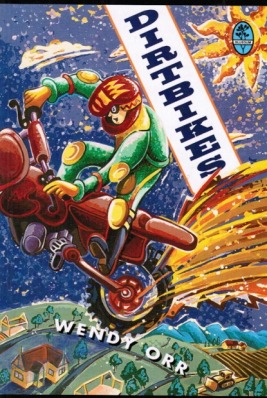 EMMA: Freedom. That’s what bikes said to me. A rush of adrenaline, excitement,but most of all freedom.Escape. I wanted to ride.

ROSS: I wasn’t really living until I was on my RM. The wind in my face, my own weight moving the bike as if we were one. The bike was the only place I could just be me.

DAN: Wanting a motorbike had always been a drea. But now it had gone from a dream to a wish and a wish I was determined to make come true.

KATE: The KX125 and I moved forward – together. There was a wonderful, satisfying roar bellying up from the machine. It was fantastic.

LUKE: Riding a dirt bike is better than anything else on Earth. No two rides are ever the same – there’ll always be a challenge!

There used to be bush all around  Naringalong, but now there’s a housing estate and hardly anywhere to ride.  For the kids near the new estate it is a summer of dirtbikes and discovery. Discovering that if you work at something hard enough – anything can happen. For Emma, Ross, Dan, Kate and Luke it is also the beginning of a new understanding: of friendship, family and … freedom.

The scream of a Motor Bike. It was the first thing we heard as we stepped out of the car, stretching in the drive way of our new house.

A red dirtbike burned up from the bush below us. The rider accelerated as he rounded a group of five gum trees, and then disappeared back down the hill, a trail of dust wafting behind him.

‘Honda,’ Dan said knowledgeably, ‘CR80′.’ I could see him changing his mind about this place already.

‘It doesn’t mean he lives around here!’ I said.

‘One kid on a dusty dirtbike – did he think that meant instant friends, things to do, a whole new life?’

‘He – or it could be she, you know – probably just came out to ride for the day. The place is deserted enough.’

No way was I going to admit that part of me felt the same way as Dan. The part that had seen how beautiful that machine was, the sleek line of the pinkie-red body swooping over the engine; the way it moved with the rider – whoever the rider was …

Then the moving van pulled in, and there was no more time to worry about making friends or riding motor bikes.