Way back in the 1980s, when we lived in the flat country around Numurkah in north-east Victoria, my son’s Cub Scout troop had a billy cart race. The kids had a great time, but I couldn’t help thinking how much more fun and exciting it would be if it had been in hilly country – like the beautiful town of Yackandandah. 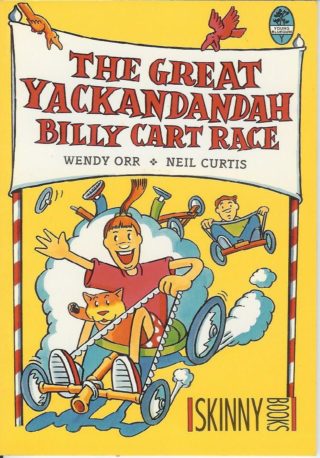 I wrote the book The Great Yackandandah Billy Cart Race, which was illustrated by Neil Curtis and published by Angus & Robertson as a ‘Skinny Book’ in 1993. I went to the Yackandandah Primary School to launch it with a billy cart race around the school. Imagine my delight when I was interviewed on ABC radio several years later and heard that a billy cart race had become an annual event! http://mpegmedia.abc.net.au/local/goulburnmurray/200811/r311491_1371346.mp3
The book was out of print by then and sadly, Neil Curtis had died. After the latest heartfelt plea from a teacher who wanted to use it with her class again, I decided to reissue it myself as a downloadable Draw-Your-Own-Illustrations pdf. 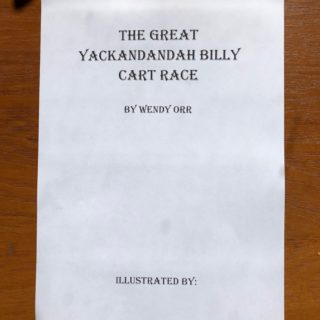 It was also a great opportunity to update it a little. The characters in the original book are the protagonist Katie and her rather bullying big brothers Mark and Matt. As there’s very little else in the story to date it, and those names are more likely to belong to parents than children now, I changed them to Ruby, Jade and Jackson. And yes, you’re right – one of the brothers is now a sister.
Although I’m seen as a girl-power writer, I think it’s very important that we encourage girls to be strong and resilient in themselves rather than taking those qualities away from boys. I often feel that girls standing up to bullying boys is a new stereotype, and this was my chance to right that in this particular story. Jade and Jackson are twins and assume the right to boss Ruby around simply because they’re older, and because they stick together. Being an oldest child myself, it doesn’t seem an entirely unlikely scenario to me…
The original book was 64 pages, which I thought was more pictures than kids would want to draw, so I’ve put more text on each page to shorten it to 30, which still leaves lots of white space for an illustration. 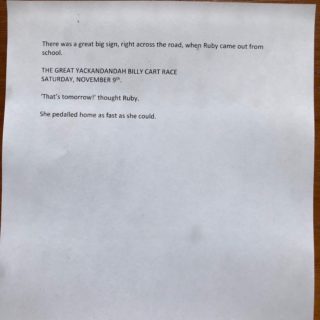 Readers can draw their own pictures, either individually or as a classroom project. ($5.00 for private use or $15.00 for a classroom or club. That’s Australian dollars; if you’re outside Australia, $5.00 is roughly $4.50 Canadian, $3.40 American, 3.10 Euros, or 2.80 Pounds. Email me through the Contact page if you want more information, including how to pay.)

The teacher who gave me the nudge to do this has promised to send me the pictures when they’re done.  I look forward to seeing more!

Click here to cancel reply.
Next post: Deadlines - When Breaking them is the Best Decision → ← Back to all posts