Difficult to judge; delightful to read: the Environment Award for Children’s Literature

I was thrilled to have Rescue on Nim’s Island win the Environment Award for Children’s Literature, fiction, and the Puggles award in 2015, so I was honoured to be one of the judges, and the guest speaker for this year’s awards.

Coral Vass has covered the awards for Kids’ Book Review, so I won’t repeat it all, but you can read my speech below.  It was wonderful to meet many of the authors and illustrators on the day – and I was very pleased that I had actually seen Rohan Cleave being interviewed on the phasmids (Lord Howe stick insects) on the news the night before the awards. That’s not something that happens often with children’s literature!

And a bit of trivia: all three of the shortlisted picture books were by an author-illustrator, rather than being written by one person and illustrated by another.

On a serious note, the threat to the Australian publishing industry means that, like many authors participating in festivals around Australia this month, I showed a Save Oz Stories placard:

“Audience members may not be aware that the Australian book industry is under threat. The Productivity Commission has proposed a number of changes to copyright that will result in fewer Australian publishers, booksellers and authors. We need to make our voices heard. If you enjoy events like this, and if you value Australian stories, visit www.bookscreateaustralia.com.au and sign the petition.’
Since it’s Father’s Day, I thought I’d start with an embarrassing Dad story. We travelled a lot when I was a child, and whenever we stopped for a picnic lunch, or camped my father would always pick up all the rubbish at the site. Can you imagine how humiliating that was by the time I was a young teen – my father picking up other people’s garbage?  And can you imagine how I admire him now that he’s 85 and walks with a stick – and still wobbles off the road when he’s walking the dogs, to pick up a coke can instead of leaving it there to pollute the woods or roll down to the sea?
And yes, whether I’m walking my dog around the bush near our home or on the beach, I usually pick up rubbish too. Not to copy my dad, but because one of the most valuable lessons my parents taught me was to love and respect nature: its beauty, and its complexity. So it’s partly because each plastic bag or six pack loop that I remove is one less that an animal might swallow or be trapped in. But even if all the rubbish was instantly biodegradable, I wouldn’t want to see it. Walking in the bush, or on a lonely beach, is something that replenishes my spirit. Sometimes, when a breeze rustles leaves, or wild waves whip the ocean, story ideas come to me – but most importantly, is that being out in the natural world settles me, at the same time that it makes me feel fully alive. And so it’s important for me to care for it. 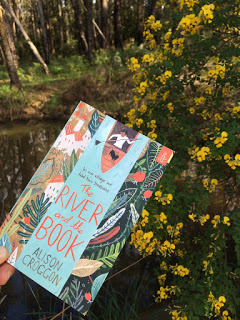 It doesn’t matter that I grew up in Europe and North America – the feeling is the same, and so are some of the lessons. Whether it’s a rattlesnake or a king brown, leave it alone.  Enjoy watching a hedgehog or an echidna, but leave them in the wild to live their own lives. The bears are just less likely to eat you in Australia.

So the environment – loving it, being in it, hiking in it, and caring for it – is part of who I am. Recently, at the launch of Dragonfly Song, I was asked why the environment is so powerful in my books. But just as I can’t separate who I am from what I write, I can’t separate the environment from my plots. The environment acts on our real lives, and if it doesn’t act on our stories, then those stories will fail to live. After all, a writer’s job is to create a world – and the environment is what makes the world.   We need to understand our real environment to create fictitious ones, no matter how way out those fictitious ones might be.
Not that everything needs to be didactic. I think the only environmental message in Dragonfly Song, set in 1460 BCE, is that the chief has killed the last lion in the island’s mountains. Goatherds are pretty happy about that, and we don’t see any environmental consequences in the time period of the book. But I still hope that readers might think about it.
Of course my environmentally focussed character is Nim, of Nim’s Island. I didn’t set out to make her a wildlife warrior – it was just the only way to make her true to the environment I built for her. However, it was fantastic to realise that kids around the world saw her as a model in that way (even this week I got letters from children who’d made solar ovens after reading the book.). So I know how the shortlisted authors feel today, because I was absolutely thrilled last year when Rescue on Nim’s Island won the Environment award for fiction, as well as the Puggles. I always feel it’s the award that mattered most to Nim.
But there’s more to these particular awards than making writers and their imaginary friends happy.  The other day, looking out at a bunch of blue wrens and yellow robins, my husband said, ‘If people could only see the birds we have here, they’d take more care of their bush.’ We live on 5 acres of bush in the Mornington Peninsula, and it was quite degraded when we moved there – so there were lots of parrots and kookaburras in the big eucalypts, but not enough indigenous understory for the small birds. As the natural bush has been restored, the birds have come back. And of course there are echidnas, very occasional koalas – and in summer we walk through clouds of butterflies, so thick they sometimes brush our faces.
Because it’s important to remember that when we’re talking about environment, we need to start with what’s right around us. It’s great to protest to save whales or rainforests in other parts of the world – but if you replace agapanthus with the rushes that indigenous butterflies breed in, you can help save a species in your own garden. Sometimes small changes can accomplish big things.
The books on this shortlist do more than walk us around one tiny piece of restored bushland. They captivate and entertain us – and along the way, inspire us to find out more about our natural environment, maybe to act on it – and I hope, to love it. 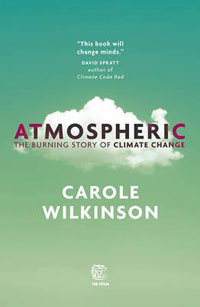 Non-fiction: Atmospheric: by Carole Wilkinson – absolutely packed with facts about the atmosphere, problems in the environment today and throughout history – as well as lots of ideas for action you can take to help. (Winner)

Platypus – Written by Sue Whiting and illustrated by Mark Jackson – I loved everything about this book, but I’m just going to point out the very interesting layout – P 12: with the larger font for the story of what this platypus is doing, and the smaller font for general facts. It works really well. 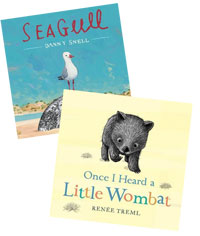 Phasmid: Written by Rohan Cleave and illustrated by Coral Tulloch –fascinating story about phasmids – the Lord Howe Island stick insects, which were thought to be extinct after black rats from a 1918 shipwreck spread over the island and ate them – until 3 were discovered in in 2001. And like platypus, beautifully illustrated.

Picture Fiction –  Seagull by Danny Snell – I once saw a seagull that had lost both its feet, presumably from fishing line, and I was SO relieved that Danny Snell allowed this one to eventually be saved, while still alerting us to the danger. (Joint winner)
A River by Marc Martin – this story of a child dreaming of how the river travels from her city to the sea is just exquisite
Once I Heard a Little Wombat by Renee Treml – read a bit rather than tell you how delightful it is (joint winner)
Fiction  – Thirst  by Lizzie Wilcock – This is a great action and survival story – emotional healing as well as physical survival, with really lovely descriptions of the Australian outback – without trivializing any of its harshness.
The River and the Book by Alison Croggon – A beautifully written book: I loved the mythic quality of the story, and found that the interweaving of respect for a sacred book and nature really lingered in my mind. (Winner)

Mister Cassowary by Samantha Wheeler – This is another book that, with a bit of fun, courage and family mystery, doesn’t minimize the risks in dealing with birds like cassowaries – actually, I don’t know that there are many birds like cassowaries! – and emphasizes the respect we need to show for nature.

Click here to cancel reply.
Next post: Blending traditions - pumpkin pie for AFL grand final → ← Back to all posts