I sent my editor the second draft of my new book last night.  First thing this morning she emailed to see she was printing it out to read, so I knew there was no point in starting all the changes I’d already thought of.

The theory of an editor reading at this early stage is to look at the structure and general form of the story:  are there boring bits? Are the characters consistent? Does it hang together and make sense? Or – the writer’s deepest fear: ‘Is it worth going on with?’  Part of me wants to stand over her saying, ‘I know this sentence isn’t right; I know this paragraph needs rearranging; don’t worry, I’ll fix it.” I know she knows that, but…

The bottom line is that no matter how many books you’ve had published, no matter how well you work with your editor, sending off that ms for a first look is a scary thing. I’ve barely lifted my head from this book for ages; today I hardly knew what to do with myself. In the end I took the dog to the beach – my usual answer for times of stress. 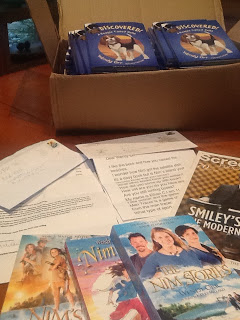 Then I came home to one of the most mixed, writerly mail I’ve ever had. A box of DISCOVERED! A Beagle Called Bella, which has apparently been rowed across from New York, a pack of Nim books to sign as a prize, a  Screen Education magazine with my article on book to film adaptation, and Nim fan letters from Sechelt, Canada, and Surrey, UK (my favourite line, from a boy:  “I like aerodynamic stuff. I also know the plane in Nim’s Island. I think it’s a 747.” And from the girl: ‘have you ever been on a plane?” I don’t think I’ve ever been asked plane questions about Nim before!)

I guess that’s a writing life, self-doubt, stress, affirmation and delight, all in one day.