“Which side were you on, Poppie?” Anzac Day excerpt from The House at Evelyn’s Pond

‘Poppie,’ Megan asked, at a Sunday lunch not long before her tenth Anzac Day, ‘were you in the war they’re talking about?’
‘One of them,’ said Fred.
‘Which side were you on?’
Three months later, on Megan’s birthday, Fred presented her with a notebook: Poppie in the Army.
‘I’m not much of a writer,’ Fred said gruffly, ‘so I did it with cartoons.’ 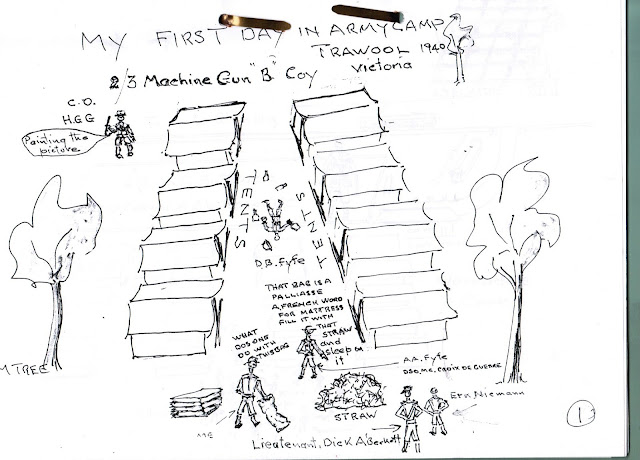 Small figures – ‘me’; ‘Jack’; ‘Corporal Butler’ parade outside their tents in the training camp at Trawool; the Ile de France wends its way to the Middle East; a flea hops across the desert from a camel to the unsuspecting ’me’, who on the following page is standing on a rock in front of a Red Cross hut – in the nuddy, the caption says – while a medico lances his flea boils and small girls giggle. ‘I closed my eyes so they couldn’t see me,’ Fred told Megan, and she giggled too. There are battles with the French Foreign Legion, glamorous pyramids, mosques, and another ship, the Orestes, pointing towards Fremantle, with a question mark thought bubble of Dulcie and two babies, one pink, one blue. ‘That’s your dad,’ Fred explained. ‘The last letter I’d had from Gran said the baby would be coming soon – I reckoned soon was past and the baby must be there, but blow me if I could work out if it was a boy or a girl!’
‘If Daddy was a girl,’ Megan began, starting her next month’s agonising what ifseries, ‘he’d be my mum…’ She looked at Jane and changed tack. ‘Then you found out he was a boy!’
‘And my word, what a day when I got that letter!  But it was some time coming, and I thought, ‘A bloke could go crazy wondering if the baby’s born yet and what it is. So I made up his birthday – February 4, I said, but I was three days early, that was the day your Gran wished he’d been born. Then I thought – ‘A bloke’s got to get to know his kid somehow!’ So every night when I lay down on my mat I said to myself, ‘Now I’m in Coburg again,’ and I said goodnight to your gran, and goodnight to a boy baby called Ian and a girl baby called Sandra. Every February 4th I wished them happy birthday, and in between I talked to the men who had kids and some of the doctors – ‘What do you reckon,’ I’d ask, ‘about what a kid can do when it’s six months old, or one year old?’ ‘Oh, it’ll be crawling,’ they’d say, ‘and laughing, or starting to walk,’ or whatever it was, and I’d think about Ian laughing, or Sandra learning to walk.’
‘What happened to Sandra?’
‘She never got born – I had to wait a long time for my little girl! It was queer when I found out, not saying goodnight to her any more, or happy birthday next time February came around.’
Megan clambered onto his lap, giving the others a chance to blink or surreptitiously wipe eyes.
‘But you should have seen your Poppie smile when that letter came! I still know it by heart: ‘Ian is walking well now; he is a lively little chap and everyone says quite big for eighteen months.’ I carried the letter around with me all the time, till it was all holes from being folded and opened again; you have no idea how I read it! It’s a poor look-out when a bloke’s son is two and a half years old before he even knows it’s a boy, but that’s how it was.’
Megan stared accusingly at Dulcie. ‘Why didn’t you write before?’
‘Don’t you blame your poor Gran! Prisoners didn’t get much mail, it wasn’t her fault.’
‘You weren’t in prison!’ Megan squealed, but calmed on seeing the adults’ faces. ‘Were you very bad, Poppie?’
‘Must of been!’ said Fred. ‘Now let’s get on with this story or your dad’s cows will never get milked tonight.’
The ‘me’ is now on another ship, waving goodbye to his machine gun on the pier; mortars explode in jungle; friend Jack has shrapnel pulled ‘out of his bum’, said Fred, with a wicked look at his grand-daughter, but though Megan knew he’d like her to giggle again, she’d caught her parents’ mood and was still. The pages that they would study later: a prison camp in Java, a railway built through rock and jungle, a hospital hut with skeleton patients and staff, the dark tunnel of a mine – Fred turned as one, saying Megan was too young for that now but he’d thought he might as well put it all in while he was at it.
Over the next few years something opened – not a floodgate, but a trickle of memories that Fred was finally ready to share: snapshot snippets of an unimaginable life. ‘The night before the Japanese invaded Batavia,’ he’d say, ‘Jack and me were billeted in this native hut, made of bamboo. It was fairly pissing down outside, pardon the French, and we were sleeping in muddy straw and duck manure. Jack woke me up and said, “You know, Fred, I have a feeling we mightn’t get out of this.” Then he pulled out his whisky flask: “We’d better have a drink; it could be the last chance we get.” He was right too; it was the last drink we had for a bloody long time. Which reminds me – how about a cold one?’
And Ian would know that the time for probing had passed. 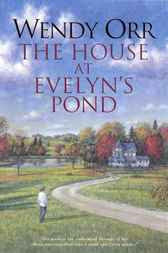 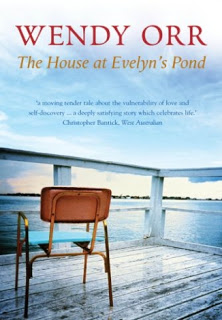 Click here to cancel reply.
Next post: Artists and Animals: Gary Long, Town Crier, and Tori → ← Back to all posts