Hate, fiction, and the Boston Marathon – why children’s literature matters

Hate can start in small ways. Last Sunday, at a community group’s meeting, I met a member of another local group trying to recruit support for more radical action. “These people are useless,” he said. “They’re funded by (the enemy.)”
Depending on your point of view, he was mistaken or lying.  The specifics are irrelevant. What’s relevant is the disgust, and the dismissal of anyone not prepared to follow his lead, let alone their right to a point of view. His supporters were apologetic, but: “He’s not really a bad guy, just passionate,” “It could be true of other groups,” and “It’s just such an important issue.” In other words, the end justifies the means.
The incident was small, upsetting rather than traumatic. But I came home feeling that I could understand how civil wars happen, as a difference in point of view escalates into a denial of others’ humanity. How belief in a cause can grow until it overwhelms friendship and dissolves empathy.
I kept thinking, “These people need to read more fiction.” Fiction draws us into other worlds, other lives – other points of view. It lets us live in someone else’s skin. The more we do that, the harder it is to deny that other people have the right to their own beliefs, thoughts and feelings. 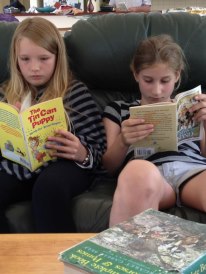 The next morning was the Boston Marathon. A sense of helplessness rolled over me: what was the point of devoting my life to writing books for children when this sort of hatred was loose in the world?
Writing to a friend in Boston – an author, editor and passionate advocate of children’s literature – I only intended to say, “Thinking of you,” because what else is there to say? Instead I found myself returning to the thought that people need to read more fiction.
Maybe writing children’s books is a step in combating hate. Maybe every time a child feels empowered by identifying with a character, or dares to dream because of a story, they are less likely to feel so powerless that they see violence as their only alternative. Maybe every time a child lives a parallel life through the course of a book, they are more likely to remember that other people have the same needs, emotions and rights that they do. Maybe the more fiction they read, the more empathetic, reasoning, and positive adults they will become. Maybe it’s important to remember every child who’s written to me to say, “Your book got me through a terrible time in my life.”
I’m not naive. I know that children’s fiction can’t solve all the world’s ills. But it can help, and it’s one thing that I can do. I’ll go on doing it.
Tags: building tolerance, children's fiction, empathy from reading, empathy in literature, encouraging empathy in children, importance of children's literature, kids reading

Click here to cancel reply.
Next post: "Which side were you on, Poppie?" Anzac Day excerpt from The House at Evelyn's Pond → ← Back to all posts