Read the Book, See the Trailer

It’s a long and tricky road from book to film, and a sequel turns out to be no exception to that. Nim at Sea, the sequel to Nim’s Island, was published in 2007 in Australia, just before the filming started for the first movie, and published in 2008 in North America, just before the film was released. Paula Mazur, the film’s producer, said immediately that she hoped to make a film of the second book as well. However, as anyone who follows films will know, it’s not that easy…

But  TA-DA! Here’s the trailer for Return to Nim’s Island, and it makes the trials of the five year journey (coincidentally, the same length of time as with the first) pale into insignificance.

If you’ve read Nim at Sea, you’ll that the film varies significantly from the text. Sometimes that has to happen; film is a different medium to a book, and has very different constraints. As a writer I have virtually no constraints beyond what the story has set: I send a girl, a sea lion and a marine iguana off
to explore New York, and they do it. It’s not quite so easy for a film using live animals to do the same. 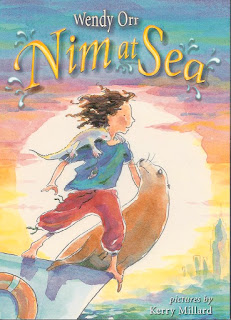 So the script has used the book’s crucial plot point of animal poachers, and underlying theme of Nim making a human friend. It’s altered the story to be absolutely true to the characters I created, and the tone of the books, as well as following the first film.

Most importantly, it looks like a fantastic film. I’ve been excited since I visited the set and saw the quality of the performances; thrilled at the stills I’ve seen since – but the trailer still blew me away. It’s incredible. To say I’m happy and proud is an understatement: the  Nim inside me is absolutely bursting with joy.

In the US and Canada, you just have to wait till March 15 to see it on the Hallmark Channel at 6:00 and 9:00 pm; in Australia it will open in cinemas across the country on April 4. We should know about other places in the next month.

And don’t forget to read the book first! Doesn’t matter if you buy it, borrow it, get it from the library… just read it, and then make sure you see the film too.

Click here to cancel reply.
Next post: Saying No: the Author as Gambler → ← Back to all posts