To follow up from yesterday’s post on the art of Ritva Voutila: I’m having trouble attaching a longer excerpt of Poppy’s Path on my site, so for Jill and anyone else who wanted to know more, here it is. 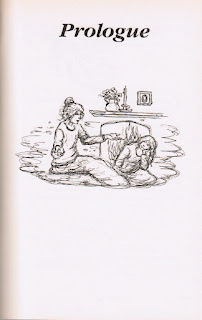 One wild wet morning, high in the hills and far away, a baby was born.
Her mother wrapped her in a new red scarf and laid her in a carved wooden cradle to keep her warm and safe.
Then the valley rocked and the mountains thundered. A roaring river burst from the heart of the hills, sweeping fields and forests, carts and cottages, down to the sea. The baby’s cradle became a boat, and she laughed as it leapt down the raging waters.
An eagle plunged from his crag. He skimmed so low that the river splashed his feathers and when he rose again, a red scarf dangled from his beak and in the scarf was a baby.
He flew over the mountains to the village in the valley and laid the baby on the doorstep of a red-roofed cottage. Inside the cottage, an old man and old woman heard the wings and wondered, and came out to see. They did not expect to see a baby on their doorstep, but the villagers often brought them lost animals and birds fallen from their nests, so they were not surprised, but they were very, very happy.
They looked out to see where the baby had come from, but all they saw was an eagle high overhead, and a field of poppies glowing red and bright as the sun came out after the rain.
‘We’ll name her Poppy,’ said the old man.
‘She can be our grand-daughter,’ said the old woman and held her tight.
****ILLUS****
Poppy soon grew tall – ‘like a giraffe,’ teased the boys;
smart – ‘like a monkey,’ laughed the girls,
and brave – ‘like a lion!’ said her grandfather, his eyes shining bright with pride.
Poppy’s hair was red and her eyes were bright; her legs were quick and restless and brown from the sun.
‘I’ve never,’ sighed the teacher in the tidy white school,’ known anyone quite like Poppy.’
Because when everyone else was walking or running or skipping straight from their homes to school every morning, Poppy was having adventures.
‘Do you know what happened?’ she’d ask, when she finally got to the school, opening her eyes round and her arms wide, ‘I found a baby dragon in the cows’ field!’
‘It was a lizard!’ said the boys.
‘A baby dragon,’ insisted Poppy. ‘I picked him up – and then I saw the mother dragon, watching us from high in the air; her scales were gold and red, and her breath was pink.’
‘A cloud in the sunrise!’ said the girls.
‘She bellowed and roared!’ said Poppy. ‘She swooped down beside us so the baby dragon could crawl on her back. They took off again with a great Whoosh!, with the baby dragon squealing and the mother hiccupping flames, then the cows started mooing and the calves started bawling – and the dragons chased the cows round and round the field!’
‘Oh, Poppy!’ said everyone. ‘You’re such a story teller.’
****ILLUS****
Poppy could jump higher, skip longer, whistle louder and run faster than anyone in the village.
‘It’s not fair!’ said the boys. ‘No one can whistle so loud.’
‘Or skip so long!’ said the girls. ‘Not fair!’
‘Why not?’ asked Poppy, jumping over the white school fence and running home before anyone else had time to get out the gate. Because sometimes Poppy wanted to run for as long, as fast and as far as she could from everyone who knew where they belonged and the path that their lives would take.
****ILLUS****
All the other children in the tidy white school knew exactly what they would do when they grew up; the girls would do the work that their mothers had and the boys would follow their fathers. But the raging river had taken Poppy’s mother and father, and she did not know what her place in the world could be.
‘You’ll find it one day,’ said the teacher, but she did not say how.
Sometimes the teacher read them stories from old books of the world outside the valley, of animals they had never seen and people that lived lives they could not imagine. ‘Tell me more,’ begged Poppy.
‘We don’t need stories that aren’t real!’ said the boys.
‘We want stories about us and our village!’ said the girls.
‘Those are all the stories I have,’ said the teacher to Poppy. ‘But I think there must be more, out in the world where there are people to tell them and people to hear.’
‘Maybe if I hear all the stories there are to be heard,’ thought Poppy, ‘I’ll find the way that my life should be.’