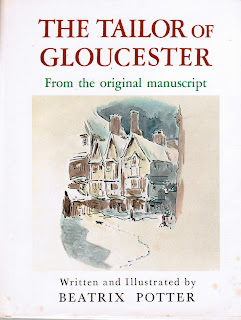 An editor’s work is mostly unseen, so it can be a shock on the rare occasions when we can compare an author’s early draft with the finished book.
I was recently thrilled to find a 1969 edition of The Tailor of Gloucester, taken from Beatrix Potter’s original manuscript.
I’m still thrilled, but for many different reasons. The first shock was the cover: not the dear little mouse tailor reading his paper on a spool of thread, but a pleasant painting of Gloucester in the snow. My favourite picture, of a mouse finishing an elaborate embroidery wasn’t there at all. (I’m sure this is what started my fascination with embroidery at about the same time). In fact, there are many fewer pictures: as Beatrix Potter said in the  letter to the child it was written for: “There ought to have been more pictures towards the end, and they would have been the best ones; only Miss Potter was tired of it! Which was lazy of Miss Potter.”
The introduction explains that she later had the book privately printed, in 1902, rather than giving it to her publisher, Frederick Warne & Co, because, “I was quite sure in advance that you would cut out some of my favourite rhymes!”
She was right: when Warne published it in 1903, it was with more illustrations, and fewer nursery rhymes. The text is trimmed and clarified. It is a much better book. One of my editors once said to me, “This is a beautiful scene – but it doesn’t belong in the book.” I’d say the same about the collection of old rhymes in Potter’s manuscript: interesting, worthy of collecting – but they don’t belong in the book.
I’ve sung editors’ praises before, because I know how much they add to my own work, but it was a rare treat to be able to stand back objectively and see their influence on a classic work.
If you’re a Beatrix Potter fan: I was searching online for a cover image and found this lovely site: Tailor of Gloucester (Though in the end I just scanned my own books.)
Tags: Beatrix Potter, editor's role, editors, Tailor of Gloucester, what does an editor do, when author and editor disagree