My Halloween gift to you:  an excerpt, which can be read as a complete short story, from Spook’s Shack, illustrated by Kerry Millard, published by Allen & Unwin, 2003 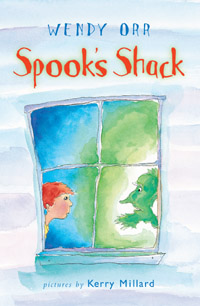 Deep in the bush, down by the creek where the trees grew thick and the vines twined tall, Finn saw a chimney. If there was a chimney there must be a roof and if there was a roof there must be a house.
But there was no road and no driveway, and all this great wild bushland belonged to Aunt Agatha.
‘No one else has lived here for a hundred years,’ she’d said. ‘Stay off the farms and away from Boris Banks’ mansion – but while you’re in the bush you’ll bother no one and no one will bother you.’
So Finn pushed his way through thorny bushes and wire-sharp grass until he could see the corner of a wall. He ducked through tangling vines and scratching branches, and then he saw the shack.
It was so old it looked like part of the bush. The walls were charred black from fire and the door was locked with a big wooden bolt.
A prickle of fear ran up Finn’s neck.
‘It’s just a shack,’ he told himself. ‘An old deserted shack. You can’t be afraid of it.’
The prickle of fear ran faster and colder.
‘There might be something interesting,’ he decided. ‘There might be gold.’
He slid back the bolt, pushed open the door and stepped inside.
The air smelled of wet dogs and stale bread, and it was cold – shivery, clammy cold. The window was dark with dirt and covered by leaves, so that not even the hottest sun could reach inside. Across the walls, lumpy green fungus glowed in the dark.
Then a dog growled, a chair creaked, and a cross, whispery voice snarled, ‘Gazumping galahs! Who’s that, clumping into my shack?’
Finn jumped – and hit the door. It shut tight behind him.
An old man was sitting in a rocking chair with a border collie dog at his knees. The hair on Finn’s head and arms stood up as straight as bristles in a brush, because the old man – a scrawny, skinny old man – had skin that glowed green from the toadstools behind him and a body that was see-through as shimmering glass.
Finn’s knees started rattling. ‘Oh!’ he said, in a squeak that made the dog shake his ears and whine.
The black parts of the dog’s coat were nearly invisible but his white ruff and paws shone as green as his master’s face.
Finn’s teeth started chattering
‘You woke us up!’ growled the old man, and the dog growled too.
‘I didn’t think anyone lived here,’ said Finn, and now he was clattering from his clenched-tight toes to his quivering hair.
The old man laughed, like gravel in a gold-shaking pan. ‘You look like you’ve seen a ghost!’
Finn slid sideways to open the door, but his knees were wobbling and his feet were as heavy as if he were walking in glue. The black-and-green dog sneaked towards him and bit his ankle with a sharp cold pinch.
‘Ow!’ Finn shouted. His foot jerked back; his wobbly knees folded – and he slid to the ground.
Cold hands whispered over his face.
Finn couldn’t breathe in and he couldn’t breathe out. He wondered if he was going to die right now.
‘You’ll have a lump like an emu’s egg tomorrow,’ cackled the old man, and held out his hand.
Finn sat up. His head went through the old man’s arm.
‘Waddling wombats!’ hissed the old man. ‘Try that again!’
The old man waved his arm from side to side, right through Finn’s head. Finn saw a blur of green and felt a shiver of cold between his ears.
‘Gazumping galahs,’ breathed the old man, with a sigh like wind blowing through leaves. ‘Looks like you did see a ghost!’
Copyright: Wendy Orr
Spook’s Shack is available as an ebook or direct from the author for $15.00 plus postage.
Happy Halloween!
Tags: Australian ghost story, children's story; ghost dog, Halloween story; ghost story; Spook's Shack, Kerry Millard

Click here to cancel reply.
Next post: Story Telling and Solving Life's Mysteries → ← Back to all posts