A mother and daughter book group reading Nim’s Island wrote to say they were thinking of changing their name to the Dead Parents Book club, as they’d done so many books where the children were orphans or missing one parent. 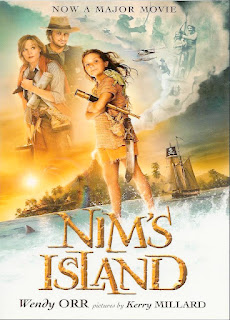 The stated reason for having dead parents in fiction is usually that you need to get parents out of the way for the kids to have good adventures. A parent’s job is to protect their children from harm, and for a good rousing adventure, you need risks and danger.
On a deeper, real-life, level, a child whose parent dies often steps up to fill a role, and has no choice but to mature. And, on the psychological level, as my Jungian friend and editor Sue says, the child may become more heroic because without the support of the real parent, they may be more influenced “by the archetypal, larger than life ‘mother’ or ‘father’ instead of the personal, so that they might be spurred on to do big and important things.
I think the other reason for orphans in fiction is that kids are fascinated by them, a combination of fear and horror at the thought of losing parents, and the desire to know how they’d cope on their own. At least, that’s how I remember feeling, especially on reading Anne of Green Gables. It was probably due to Anne, that when my 9 year old self wrote the story that morphed into Nim’s Island 30 + years later, the heroine was an orphan.
Yet when I started planning Nim’s Island, Nim had two living parents. I always intended to get rid of them – originally they were going to sail away for a year or so, rather like Pippi Longstocking’s father. Then my gender biases and cultural conditioning, or just plain maternal instinct, revolted. I realized that I could forgive the child’s father for sailing off, but not the mother. (Yes, I know that’s wrong, unfair, outdated, etc, and in real life I would probably judge the father just as harshly as the mother. I’m just being honest about the subconscious processing).
The only way I could write the book was to kill the mother. (Which I decided on a walk with my daughter, who was somewhat shocked when I suddenly announced, “I’m going to have to kill her.” Apparently that’s one of those statements you should prefix with an explanation of what you’re thinking about, or at least mention that it’s fiction.)
Though I suppose it still all leads back to the beginning, because I wouldn’t have had to kill her if I hadn’t needed her to leave her child alone on an island, and get out of the way of having those adventures.
Or maybe I wouldn’t have ever pictured her alone on the island if I hadn’t read of orphaned Anne of Green Gables, or fatherless Jim Hawkins in Treasure Island when I was nine… but their stories wouldn’t have happened if they’d had two parents.
Tags: dead parents in fiction; orphans in children's literature; missing parents in children's books; Anne of Green Gables, mother-daughter book group, Nim's Island, writing for children

Click here to cancel reply.
Next post: Tangles - getting inside a child protagonist's head → ← Back to all posts