A Type Of Teen blog interview

Something very special about being interviewed by one of my readers! Audrey is 13 and runs the very impressive atypeofteen wordpress blog. She recently interviewed me about my writing, and Raven’s Mountain in particular.

When did you decide you wanted to be an author?
I dreamed of being a writer from the time I learned to read and write in English, when I was nearly 7. (I started school in France,so had learned to read and write in French, though English was what we spoke at home.) All through school I wrote plays, poetry and stories – including one about a girl who lived alone on an island. One day at work a friend told me she’d written a book, and I decided it was time to do what I’d always dreamed of, too. I started writing, and year later, in 1988, my first book, Amanda’s Dinosaur, was published.
What gave you the idea for Raven’s Mountain? 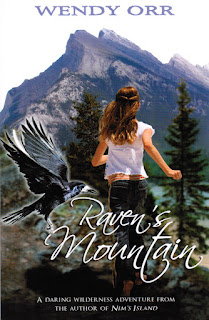 The first image that came into my mind to plant the seeds for this book were of a girl experiencing oxygen lack while mountain climbing, (as I had, as a twelve year old, at 3000 metres, which my pilot father explained was the height at which pilots of unpressurised planes needed to start using oxygen). I think the point of this image was the feeling of confidence as I regained my breath and went on to finish climbing the mountain.  The second image was of a girl smashing a house window, being torn between feelings of wickedness at doing something so uncharacteristic, and hoping that a security camera would pick up her actions and alert someone that she needed help.  I have no idea where that thought came from, but the dilemma was interesting to play with.
Like many people, I’ve long been fascinated by the white Kermodes or spirit bears, who live on an island and small section of coast north of Vancouver. As they are a subspecies of black bear, so that a white mother may have one white and one black cub, it struck me as likely that their whiteness was a recessive gene. And as the mountains at this coast run into the Rockies, it seemed likely that Kermodes bears might occasionally turn up in other mountain ranges. In fact, while I was working on a later draft, I saw a newspaper report that a Kermodes bear had in fact turned up in Banff, a couple of thousand km southeast of where they’re known to live.
I’ve also been fascinated by the North American ravens, ever since I got to ‘know’ an orphaned one who was being raised by a friend. Its intelligence was extraordinary, and I understood why it plays the role of Trickster and Creator in the First Nations mythology.
What is your first memory of writing?
Sitting at the coffee table in the living room when I was seven, writing “Glossy the Fairy Horse or Shetland Pony.”
Of all the books you’ve written, which is your favourite?
I can’t really choose; they’re all special in different ways. Nim is my favourite character in some ways, but Raven is my favourite realistic character; I think Ark in the Park is the book that is closest to exactly how I wanted to write it… and I know that many people believe Peeling the Onion is my best, but it’s too personal for me to know.
What age group do you prefer to write for?
10-13, if I absolutely had to choose. But I love the freedom of just writing a story the way I feel it wants to be written, and letting my publisher worry about what age group that seems to be.
What style of writing is your favourite?
Another tricky one! I love the fun light touch but it’s usually very hard work to do.
What is your tip to aspiring authors?
Go on writing. Just write whatever you want to, enjoy it, and throw yourself into it. And read a lot – the more you read of different authors, the more you’ll learn about writing, and about how you want to write.
If you could rule the world for one day, what would you do?
Set up literacy projects for children everywhere around the world – making extra sure that girls got their chance to learn to read and write.
Tags: being a writer, getting started in writing, Raven's Mountain, writing for children

Click here to cancel reply.
Next post: Here's What's (Probably) Wrong With Your Story... � The CBI Clubhouse - The Community for Children's Book Writers → ← Back to all posts