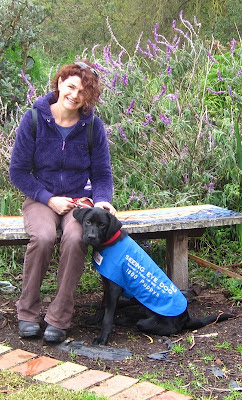 Much as I love puppies, they’re hard work, and often destructive. (Yum, shoe! etc) So I’ve always admired people who are willing to take a dog through this adorable but demanding stage before handing them over, even to something I believe in as strongly as the Seeing Eye Dog Association. It seems a huge commitment, and so I was very interested to interview Monica Kervin, puppy carer.
How would you describe the work you do with Seeing Eye Dogs Australia (SEDA)?
I am a volunteer “puppy carer”. I raise the puppy until she is ready to begin her formal training as a Seeing Eye dog. As well as loving and caring for her, basic obedience training, and teaching a few other more specific skills, my main job is socialising the puppy and exposing her to as many different types of situations as possible. She lives at my house and comes everywhere with me: work; shopping; into the city; shopping centres; on public transport; parks; to the movies; cafes and restaurants; meetings; nursing home; wherever.
What was the path – or the passion (!) – that led you to it?
I can’t remember when I first heard of the concept of puppy caring. I must have been in my early teens, and I desperately wanted our family to do it then. I guess a big part of it at the time was the whole thing about having a puppy, but I also liked the idea of the puppy going on to do such an important job. We were always taught to have a social conscience, to contribute to the Community and generally put yourself out for others, and I could see that this would be a great way to do that. But that wasn’t going to happen as we lived on a farm miles from anywhere. It wasn’t practical on any level or from anyone’s point of view so the idea was shelved. But it never left me. Over the years it has resurfaced at different times but I was at Uni; or I was traveling; or I didn’t have a secure garden; or there was always something. At one time I compromised by sponsoring a puppy, but it wasn’t quite the same. More recently my stumbling block has been that I am a kindergarten teacher and I assumed for some reason that would be an issue. Eventually it got to the point where I felt I had to at least ask – If the answer was no then I could let it go. The answer was yes! In fact my workplace was extremely enthusiastic about the idea. That was last year; I now have my second puppy, Libby. 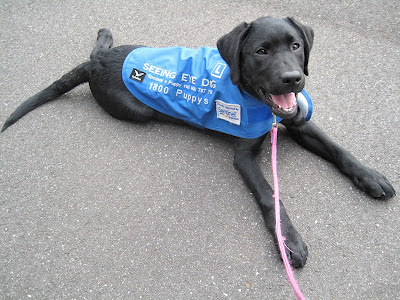 What is the best, and the worst thing of your work with animals?
Worst? – I can’t ride my bike to work anymore. 
A lot of people ask how we can give them up and I can understand that, but there are a lot of other things in play. A big part of it is knowing from the start that it is a temporary arrangement. It’s not like getting a puppy and then 12 months later it is hit by a car or stolen for example. You know they are going to be loved – that makes a big difference – and you know that they will be providing someone with independence. Something so many of us take for granted. I don’t see giving them back as a negative. It’s not the BEST bit – bittersweet perhaps.
Best? – That’s much harder. There are so many positives. Of course there are all the usual things about having a puppy. The fun – getting to know their personalities and having them about the place and all the many other truisms that people say about having a pet.
I think one of the great things about being a SEDA puppy carer is the enormous amount of support you get. Someone visits regularly to help with training and any other issues you may be having, and they are all really lovely people. How regular the visits are depends on the age of the pup and the confidence/competence of
the carer, but they are only a phone call away if anything arises between visits. There is training as a group once a month and social occasions organised for carers and puppies too. All this and with food, bed, toys, vet costs, and other essentials thrown into the bargain. And public transport is free.
Did you have pets as a child?
Growing up on a farm there was ALWAYS animals! We had cats, dogs, chooks, peacocks, galahs, budgies; quail; lambs, rabbits, horses, and being a dairy farm we had cattle. One of my jobs on the farm was, along with my younger brother, raising the calves. We didn’t see them as pets as such but we named them all, and by the time they were ready to wean we’d become somewhat attached to them. As far as my “own” pets, I had a cat called Goliath – and subsequently any kittens she had became mine.
Do you have an animal companion now, apart from your SEDA puppy?
Not really. I did have a rabbit for several years until she died. I have also had ducks and chooks, but only fish now. At work in our kindergarten, as well as Libby we have guinea pigs, fish, worms, snails and stick insects (which are all equally loved by the children). So I still have responsibility for a variety of different “pets”.
If you were an animal, what would you be?
I’d like to think I’d be something exotic, but I’d probably be a cat. I’m independent and do things my own way, in my own time and on my own terms. I’m happy to let other’s do things their own way too – as long as they don’t put anything in “my space”. In an ideal world I’d be a creature of leisure and not have to work for a living, but given that I do have to work, at least I have the kind of job where I can play quite a bit of the time. I never grew out of getting really excited about silly little things. Everything is an opportunity for fun – which is another reason my job is so perfect for me. And I’m very good at relaxing 
Any advice for people wanting a pet? 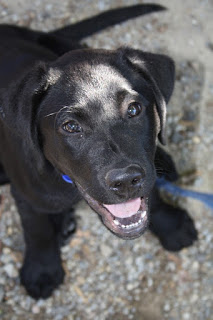 It’s a commitment. I guess when choosing a pet you need to think about the practical issues like maintenance, cleaning, toileting – all the least fun things. Think about where it is coming from, for example many pups sold in pet shops were bred in “puppy farms” in horrible conditions, while shelters and refuges have to put animals down if they are unable to find homes for them. Another important consideration is the amount of space and time you have compared with the needs of your chosen pet. But the positives way outweigh the negatives. The list of positives in endless 
Favourite animal books?
Anything by Wendy Orr, of course.
“Winnie the Pooh”; “The House at Pooh Corner”; “When We Were Very Young”; and “Now We Are Six” by A.A. Milne, illustrated by Ernest Shepard. Are they animal books?
After your first pick, Monica, you’re allowed to choose anything you like! I’ve known many dogs who were Tiggers, or Eeyores… or even Pooh.
Tags: animal careers and carers, puppy carer, SEDA, Seeing Eye Dog, training seeing eye dogs, volunteer