Lots of writerly events in my three weeks in Canada & quick stop in LA, but first I have to share the story of why our first phone message when we turned on the  mobile at the airport was: We have your dogs. From Zarboo Hairdressing Salon.

It seems that Harry was jealous of his predecessor Bear having his own book about getting lost, and so he and his friend Pippa decided to have their own adventure too. They had a lovely house-sitter staying here with them, and apparently behaved very well till Wednesday. That morning, just as she was about to clip on their leads at the back gate, they scented a rabbit and took off though the thick bushland. She called, chased them, searched the block, phoned neighbours, and finally went out searching in the car.

Meanwhile, having given up on the rabbit, the two escapees headed off on their usual walk. They passed the hairdresser, apparently looking so pleased with themselves that she went out to see where we were – and of course saw no one. However the dogs followed her back to the salon, so she very kindly let them in. (And phoned the number on their tags, but of course the house sitter was out searching, and we were somewhere over the Pacific with our phones turned off). 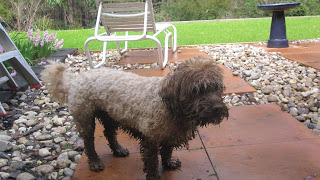 Harry was, she says, putrid. (A common state for him.) And when he’s wet, muddy and happy, his favourite way to dry himself is to skid along the floor on his wet muddy back. The smooth salon floors proved ideal for skidding – he was so ecstatic that Pippa tried her own version of hopping and racing around, and the two of them skidded and hopped, round and round the lovely clean salon. This built up quite an appetite, so they successfully suggested that they share in some lunch.

Of course all good parties have to come to an end, and eventually the distraught carer was reunited with her naughty charges. I don’t know whether she’s now considering a career change, but she seemed quite relieved to see us yesterday morning.

We’re relieved too. Relieved that we’ve come home to two happy, healthy dogs – and grateful that we live in a community where people will take the time and trouble to care for a lost pet.  This is an amusing story in retrospect, but it could have turned out very differently. And although both dogs are microchipped and tagged, they wouldn’t have been quite so chirpy if they’d simply been turned in to the pound (especially Harry, who as a third time rescue when we got him, had spent two sessions in the Lort Smith Animal Hospital in his first year of life. A wonderful place, but not one we want him to return to.)

So, thanks to everyone at Zarboo!

Click here to cancel reply.
Next post: Artists and Animals: Robyn Osborne and Sox → ← Back to all posts