Robyn Osborne is a teacher, author and animal fanatic. Her first published book, D.O.G.  was a junior novel about a boy who desperately wanted a pet dog. (Macmillan, 2005). In 2010, her second book, Dog Logic-a pooch’s guide to dogs behaving badly was published by Big Sky Publishing, Sydney. Dog Logic is a quirky, funny view of the world from a canine’s perspective and was co-pawthored by her clever dog Sox, ‘The Philosophical Pooch’.  Sox is a canine columnist with Dogs Life magazine and  even has a Facebook Page where he dispenses fun, furry, four-legged philosophy.
http://www.facebook.com/pages/Sox-The-Philosophical-Pooch-Osborne/162936030398385
Robyn’s website is http://robynosborne.com/
Have you ever been inspired by an animal, or animals in general, in your life or art?
Animals have always been a huge part of my life. When I analysed most of my stories (published and unpublished), I realised nearly all of them focus on my pets, past and present. My very first published story, ‘The Heartworm War’(Smarter Than Jack 2, Avocado Press, 2004) was about Bluey, a canny cattle dog I owned as a kid. Bluey was also the inspiration for a recently published short story, ‘The Workin’ Dog’ (The Bridge anthology, Stringybark Publishing, 2011). Big Bad Boisterous Bruno Bright, the Bluey from the Bush retells the story of my father’s dog, using alliteration and good old Aussie colloquialisms. My current canine companions, Snowy and Sox aren’t forgotten. They star in their very own picture book manuscripts; My Dog Sox andSnow Dreams (both as yet unpublished, but I live in hope!). I’m writing a book about my animals, called The Bright Menagerie. Whenever I think it’s finished, I remember another funny incident worth jotting down, so it’s a work in progress. 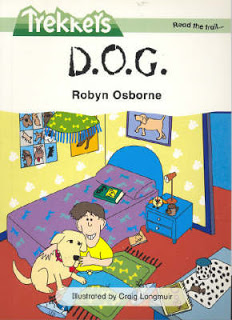 Did you have pets as a child?
I get my love of animals from my father and I can’t remember a time when we didn’t have pets. At 11, I made the connection between the cow and the steak on the plate and turned vegetarian (which I still am today). Over the years there have been many four- legged furry friends that have enriched my life; dogs, cats, mice, goats, sheep, cows, a pig (not strictly furry, I know).  There was even a praying mantis called Orville.
Do you have an animal companion now?
Snowy and Sox are both ex RSPCA dogs of indeterminate breed.  We adopted Snowy in 1995 and three years later Sox joined us. Although they share a love of chicken and a hatred of the neighbour’s cats, they are opposites in many ways. Snowy is a small, energetic terrier cross, while Sox has an easy going manner and a generous figure. His speckled paws suggest cattle dog heritage, but his penchant for grass hints at Aberdeen Angus.  Dog Logic is Sox’s view of the world: irreverent, honest, fun, naughty, at times a little rude, but always with tongue firmly planted in muzzle. Snowy also has literary aspirations, quietly penning Midget Bones’s Diary – Memoirs of a Mongrel’ her racy, risqué (and yet to be published) autobiography. 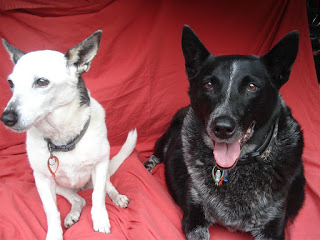 What would your pet tell us about you?
I’ll hand over to Sox on this question. “As a human PA to a celebrity canine like myself, I give her the paws up. She is fluent in dogspeak and experienced at ear caresses, tummy rubs and muzzle patting. She is also prepared to take on other duties as directed, such as accompanying me on country rambles, sweeping excessive fur from floors and discreetly cleaning up any wee accidents. Most importantly, she has opposable thumbs, because claws and computers just don’t work!”
If you were an animal, what would you be?
Being a vegetarian, I’d have to go for a goat living on an organic farm, high in the mountains.
Any advice for people wanting a pet?
All my canine friends have been strays or rescue dogs, so I am a great supporter of animal welfare groups and the push for mandatory de-sexing of pets. As an ex-RSPCA puppy who overcame a difficult start to life, Sox is proof that a dog from the wrong side of the pound can still achieve greatness.
Favourite animal books?

There are so many I could mention.  I did love My Dog Mab, a RSPCA storybook (Jutta Goetze), but my all-time favourite would have to be Rex, an English novel about a sheep dog (Joyce Stranger), given to me by my father when I was 15. I still have to reach for the tissues in some parts of the book.

Click here to cancel reply.
Next post: State Library of Queensland Young Writers Award → ← Back to all posts