Meeting other authors is one of the best bonuses for going to writers festivals, and as we live in different states, I’m always particularly thrilled when I get to spend time with Ursula Dubosarsky. I’ve always admired her books, but had somehow missed reading The White Guinea Pig until shortly after finishing the ms for Wanted! A Guinea Pig Called Henry. It’s been interesting to hear how these funny little creatures have often wiggled their way into Ursula’s books. (Even the wonderful The Golden Day, which has just been shortlisted for the CBCA Book of the Year for Older Readers, has a tiny reference to a much loved and mourned guinea pig, Archimedes.) 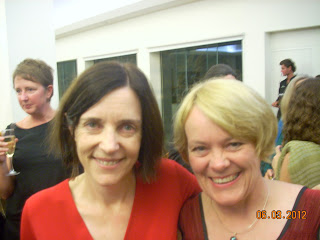 You can find out more about her at http://www.ursuladubosarsky.com.

Have you ever been inspired by an animal, or animals in general, in your life or art?
Well it seems I’ve been inspired A LOT by guinea pigs. Guinea pigs have a special place in my creative life. The very first book I wrote was about a giant guinea pig, and then guinea pigs have featured in small roles in at least 5 or 6 of my other books. And I’ve just written three little books about a guinea pig detective named Alberta.
Why I’m so fond of guinea pigs I’m not sure. I had guinea pigs as pets over the years of course, and I do think they are beautiful little animals. But I was also very touched by something I read about them – that in the wild they have no defences except to hide or run away. Something awfully appealing about that!
Talking of inspiration though, my book “Honey and Bear”, illustrated by Ron Brooks,  about a  bird and a bear,  was an inspirational story in that it came to me in a dream. I wish I could dream that dream again, actually…
Did you have pets as a child?
I was very much a pet child. I always wanted a dog (and eventually got one) but while I was waiting I had fish, mice, guinea pigs, budgies, snails, silkworms – whatever I could manage. I’ve written about this in my book “The White Guinea Pig”  – the main character, Geraldine, is a pet addict and pretty similar to me as a child, at least in that aspect.
Do you have an animal companion now? 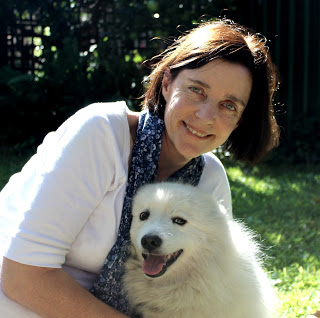 We have a very loved pet dog now. He’s a fluffy white Japanese Spitz and his name is Argus. We named him after Odysseus’s dog – when Odysseus comes back from his 20 year journey, only his nanny and his dog, Argus, recognize him. (Of course, after 20 years, as soon as Argus recognizes him, he rolls over and dies…)
What would your pet tell us about you?
Well, he’s certainly a very dopey dog. When people say, oh, my dog is so intelligent, I can’t help wondering – compared to what? But it’s true his dopiness is SO endearing. My son said to me once, Mum, if Argus was more intelligent, you wouldn’t love him so much. I suppose that says something about me!
If you were an animal, what would you be?
As a child I always wanted to be a dog as they seem to have the ideal (and idle) life.  I do love being at home, like dogs do. I wouldn’t have the energy to be a bird – imagine having to fly around all the time. Whereas dogs can just lie on the floor snoozing for hours.
Any advice for people wanting a pet?
I remember when my children were young we got a pet rabbit, and when I mentioned this to one of the mothers in the playground she looked at wisely and said: “There will be some deaths”.  I was a bit taken aback! But actually she was so right. It’s something to bear in mind when you are thinking about getting a pet.
Favourite animal books?
Of course I love Charlotte’s Web. And I love Arnold Lobel’s “Mouse Tales” and “Owl at Home.” I do love books about animals – probably in preference to most other kinds of books! Which is odd in a way, because I don’t enjoy fantasy books. But animal stories seem to be in a category all of their own somehow…
Tags: Artists and animals, author and dog, guinea pig books, Honey and Bear, Japanese Spitz, ursula dubosarsky