Tristan Bancks is a children’s author, who tells stories on page and screen. We met
at a writers festival a few years ago, but I hadn’t had the  chance to hear him perform until recently, at the Somerset Festival. I can tell you – if you get the chance, go to hear Tristan talk about books and writing. And meanwhile, visit his excellent website: www.tristanbancks.com

Have you ever been inspired by an animal, or animals in general, in your life or art?
Certainly Skippy was an early inspiration. I think every Australian child of the ’80s wanted to be Sonny and to have the ability to decipher the unintelligible clicks and tuts of kangaroo-ese. My Nit Boy books were inspired by insects – the head lice epidemic in schools across the country. They are about a kid with the worst case of nits in world history who actually loves his nits. He says, ‘Nits are people, too’ and he cannot believe the wanton destruction of head lice at the hands of humans. My dog, Boston, shows up in the Nit Boy books when the head lice get stranded on his coat and are pursued by malevolent fleas. Boston has been the inspiration for several dogs in my books. He shows up as ‘Bando’ in short story The Dog Kisser (audio story here). 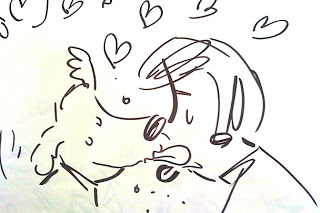 Did you have pets as a child?
We never had much luck with pets. We had a wide variety of them, each for a very short period of time. I had a goldfish called TC (named after the helicopter pilot in Magnum P.I.) who turned black and floated to the top of the tank. I had another fish called Abraham (named after Arnold’s fish in Different Strokes) who met a similar fate, causing me to discontinue use of that fishbowl. We found a dog called Missy and found the owner soon after. We had goats called Bell and Bellamy (chasing one another with their poo on a stick was a hoot) but I believe we lent the goats to someone with long grass for a week and a dog ate them. We had a very large parrot in a cage which woke us at 4.30am each day and was promptly returned to the breeder. As an adult my track record is much better. Just Boston the dog – happy, healthy, well-adjusted, perpetually hungry.
Do you have an animal companion now? How did it get its name? Does your pet have a story to share? 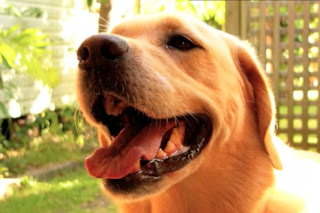 Boston is a Labrador / Golden Retriever cross. He is eleven years-old and possibly the best dog in the world. I haven’t been to Boston but I would like to go there. Story below.
What would your pet tell us about you?
He would possibly tell you that I don’t give him quite enough walks and not enough very large snacks but he is extraordinarily well-mannered and eager to please so he might bear these burdens in silence. I would hope that he would say good things. He might tell you of the time, when he was a puppy, that I descended a dark staircase and trod in a large pile of his poo, in bare feet. I screamed. People ran to the top of the staircase. I took another step and trod in another one. I’m not sure if he remembers it but I am scarred.
If you were an animal, what would you be? 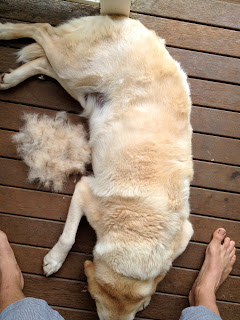 A dog. I would be Boston but I would demand more walks and not be so polite about it. I would like to fly, however, so perhaps a flying Labrador / Golden Retriever.
Any advice for people wanting a pet?
Train your dog early. Especially if you have kids. Try to take the time. It is well worth the effort.
Favourite animal books?
I love My Side of the Mountain about a kid living in the wilderness with a weasel and a falcon for company. Michael Gerard Bauer’s Just a Dog is a beautiful story. I love that book Nim’s… something. It’ll come to me – a brilliant book about human / animal connection. I love the picture book Some Dogs Do (about a dog who thinks he can fly) and Gus Gordon’s Wendy about a flying stunt chicken. And, of course, Animal Farm (a slightly darker animal tale).
Tags: Artists and animals, author and dog, Nit boy, the dog kisser, Tristan Bancks

Click here to cancel reply.
Next post: Artists and Animals: Kerry Thompson, aka Kerry Millard → ← Back to all posts