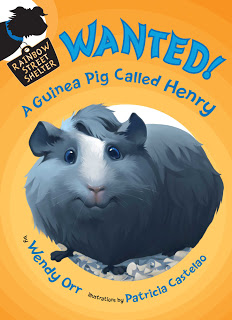 Really, I should say, “Happy Birthday, Henry!” because Wanted! A Guinea Pig Called Henry is out today, in Canada and the USA. It’s the third Rainbow Street Shelter book, and yes, it’s about a guinea pig called Henry, but also a girl called Sam. Samantha is very dear to me; she has her problems (in fact, she has mild athetoid cerebral palsy, although I don’t name it in the book, because her problems aren’t what define who she is) but she is a very determined girl. One of the things she’s most determined about is that her little brother Liam will have a happier start in school than she did, and so when she sees how happy she is to read to Mona’s little dog at the Rainbow Street Shelter, Sam has an idea…

Like most stories, there were lots of beginnings. My faithful guinea pig Henry, who shared various student cramped apartments with me  in London. He was quite a character, and especially loved rolling apples around the floor. (He loved chewing electrical cords too, though that didn’t seem a good thing to add in the book.) 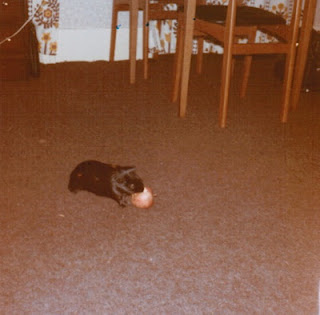 Samantha comes from a mixture of kids I’ve worked with, known or respected. She was one of those fully formed characters when she arrived, so it’s harder to see where she comes from. However her reading dog idea comes from the daughter of the Girl Scout leader who initiated the Nim’s Island Girl Scout patch. When we visited, the girl took me to her school, and I met the reading dog there…

And I absolutely love the pictures, by Patricia Castelao! Thanks, Patricia.

Wanted! A Guinea Pig Called Henry is published by Henry Holt in hardcover, paperback and kindle, and can be purchased directly from them, from independent book stores, Barnes and Noble, Chapters or amazon.com or amazon.ca

Click here to cancel reply.
Next post: Artists and Animals: Cheryl Rainfield & Petal → ← Back to all posts