One of the best things about doing this series of interviews is finding out more about the backgrounds to friends’ books, and lives! I’ve met Prue Mason’s current dogs, but it was fascinating to hear about her childhood pets, and of course the dog that inspired Camel Rider.
You can find out more about her on her website: www.pruemason.com 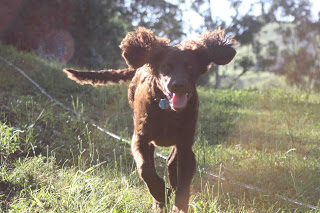 Prue says:
I’m very much in the party of people who say ‘animals are people too’. In fact most people say if we do reincarnate they want to come back as one of my animals because it would be a cruisy life.
My earliest memories have animals in them. There was huge black cat, Bert who would sit on a person’s chest, knead his claws and dribble. There was no moving him off if he’d chosen you as the one or he would get annoyed and he had verrry sharp claws. Then there were the dogs. Living on a farm we had a pack of them. Not that any were actually working dogs. This lot were more the sort that might have been found in the days when the hunting dogs lived inside large, draughty halls with the lord of the manor and ate from food thrown from the table and then bedded down next to some warm body at night. The only real work they were supposed to do was hunt and be companions and maybe guard dogs. Ours were exactly like that. There was Big Dog. As you probably guessed, he was named because he was a big dog, part grey hound and part horse I think. Pup was one of his brood that we kept and named before he grew up into another large dog. Allez Oop was the ex fox hunting beagle who led them on hunting expeditions. Besides these three we also had an Australian terrier called Tim. He couldn’t keep up with the big dogs so the only way he could go hunting was sitting up on the front of my pony, Midnight.
With animals so much part of my life growing up, when I left home I wanted my own dog and cat but as I spent most of my time travelling and then married a pilot and travelled a lot more around Australia and the world it wasn’t possible. As soon as we settled down in the Middle East where we thought we would like to stay for a few years we did get a black cat called Wali. He was part Siamese and loved to talk. He also had an interesting kink at the end of his tail. According to legends from Siam special cats have this feature because many, many years before a princess slipped her rings over the tail of the cat while she was bathing and the cat kinked the end of his tail to keep them safe. This beautiful story sparked an idea for my own story and the consequences of that turned out to be my first ever rejection. All the same it pointed me towards the writing path that I’ve been following since. That particular idea is still in my mind. Now with a few more skills who knows – maybe one day you’ll see a story out there about a fabulous cat with a kink at the end of his tail.
At that time we also found our dog – our desert princess. Tara was part saluki and a part…well we were never quite sure but it was certainly something smart and beautiful, that is if you like long noses, large, swivelling radar-like ears and skinny legs on top of a deep chest. 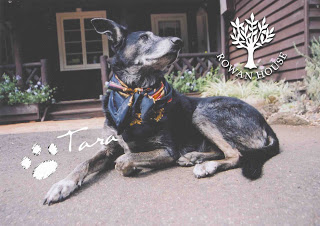 She was the one who inspired my first successful book, Camel Rider as she was the motivating force behind the plot of two boys from different worlds having to work out how to get on together to survive.
Tara always seemed to know she was destined for greatness as in Hindu, her name means star. After that book became successful she loved visiting schools with me and giving out her pawtograph to her wildly excited fans. She was endlessly patient as I would hold her paw onto a stamp pad and then stamp it on a piece of paper, book or even the back of a hand. I wonder how many of those treasured scraps of paper are still being kept in some bottom drawer.
It’s over three years now since Tara left us and we now have a completely different dog. He’s big, boofy and a handsome chocolate brown. It took awhile for all of us to adjust and his puppy times were fraught for all of us until we finally discovered what Mahoney is good at – retrieving. I suppose we should have worked this out because he is a Murray River Curly Coated Retriever. It was only when he arrived in our bedroom at about six months old with the paper in his mouth that we realised his special talents. Of course we made a big fuss and he was as proud as proud. It took awhile then to teach him NOT to bring all the neighbours papers back as well. As yet, Mahoney has only made a cameo appearance in a soon-to-be published book but there’s plenty of scope for inspiration now that he’s growing up into a funny, slightly cautious, but endlessly loving lad.
Was there a pet you would have liked to have as a child, and didn’t?
I would dearly have loved a monkey as a pet when I was a child, just like Pippi Longstockings.
What would your pet tell us about you?
Tara would have said that her one frustration in life was that I never always accepted that she knew best. Mahoney would say he utterly adores me and there’s nothing I do wrong and it’s not really just because I feed him although that is a pretty important reason.
If you were an animal, what would you be?
I would love to me a cat and be mysterious and laze around all day but suspect I’m more of an Australian magpie, territorial, busy in my own place, and like to be heard when I’ve got something to say.
Any advice for people wanting a pet?
Be prepared to change your life around to suit your new companion and expect to completely lose your heart to them.
Favourite animal books?
I loved ALL horse books. Some that spring straight to mind are The Silver Brumby, Flicker, Black Beauty, The King of the Wind. I cried my eyes out over Greyfriars Bobby and The Incredible Journey as both stories are about how loyal animals are to their owners. The first book I ever read all on my own was the Cat in the Hat. I still remember the joy of reading a real story by myself.  The fact it was about a cat made it even better.
My first ever story, to be written by my sister and I featured a dog and a girl. We created a whole series of brilliant books for four years olds but not one word was ever written because my sister was only five and I was nearly four and neither of us had learned the mysteries of those wonderful scribbles on the pages of books at the time.  Since that first book, reading and books have been a cornerstone of my life. Animals are another. I’m sure people do manage to live without books and animals in their life – I just don’t understand why they would want to.
Tags: Artists and animals, australian children's author, author and dog, camel rider, childrens books, prue mason