This is the first of a weekly guest series that I’m planning to run throughout the year, interviewing other authors and artists in various media: partly to celebrate the Rainbow Street Shelter series, but mostly because I’m intrigued at how people interact with their pets.

I’ve always been in awe of how much work Paul Collins accomplishes in all the different roles of his life, but I think I’ve now discovered the secret: he’s actually a red heeler in disguise!

Paul Collins was born in England, raised in New Zealand and immigrated to Australia in 1972. He lives in a historic bluestone home built in 1851 with his partner, fellow author, Meredith Costain, and a menagerie of pets including a kelpie called Jack and Molly, a red heeler. 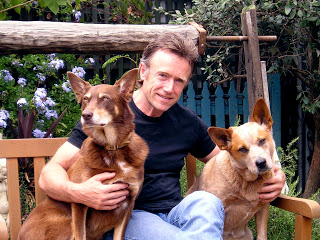 His many books for young people include The Slightly Skewed Life of Toby Chrysler and series such as The Jelindel Chronicles, The Earthborn Wars, The Quentaris Chronicles and The World of Grrym in collaboration with Danny Willis. His latest book is Mole Hunt, book one in The Maximus Black Files. The trailers are available here: http://www.youtube.com/watch?v=3S-eKDYqpEs and http://www.youtube.com/watch?v=n4tTn_WXCiw He is also the author of over 140 short stories.
Paul has been the recipient of the A Bertram Chandler, Aurealis, William Atheling and Peter McNamara awards and has been shortlisted for many others including the Speech Pathology, Mary Grant Bruce, Ditmar and Chronos awards.
He is currently the publisher at Ford Street Publishing (www.fordstreetpublishing.com) and manager of Creative Net, a speakers’ agency for schools and festivals (www.fordstreetpublishing.com/cnet). Visit him at www.paulcollins.com.au) 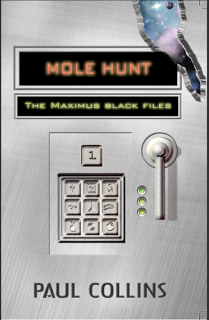 Have you ever been inspired by an animal, or animals in general, in your life or art?

They say a good laugh is great for well-being, and without the latter where would our imagination be? Suffice to say, I have a red heeler and a kelpie. Even watching them play tug-of-war is a good laugh, as the heeler, when losing, simply plonks herself on the ground and won’t let go as the kelpie pulls her along the carpet. Without the pups (I don’t like calling them “dogs”, as that’s a derogatory term in the human language, and I feel humans are often more “dogish” than the animals) I possibly wouldn’t be getting my quota of laughs per day.

Did you have pets as a child?

I had a rabbit called Foxy — an escape artist if ever there was one. My other main pet was a boxer called Rusty. I was pet mad as a kid, with quail, budgies, canaries, fish, rabbit, dog, etc. I even had pigeons.

Tell us about your animal companions now.

I have the two pups, also a cat shares the house (much to the disdain of it and the pups), chickens and goldfish. Luckily the cat doesn’t like getting wet, so the fish are safe. I named the kelpie Jack and Meredith loves the name Molly, so the heeler copped that. Harriet, the cat, has her name from a picture book Meredith wrote called Musical Harriet.

What would your pet tell us about you?

Well! Let me tell you … Actually, I doubt the pups would have much to groan about. They jog with me in the mornings, and Meredith takes them out for a walk in the evenings. They get cooked meat and vegetables for breakfast and dry food at night. During the day they’re spoilt rotten with crusts from sandwiches, and basically anything else they can scrounge. Molly brings a shoe into the kitchen whenever we go in there — she won’t let go till she gets her “reward”. Heck, when I die I want to come back as a pup into this house!

If you were an animal, what would you be?

Probably a red heeler. Especially if I could be as smart and cunning as Molly.

Any advice for people wanting a pet?

If we’re talking pups — get a small one if you’re not able to take it for at least an hour’s walk during the day. A medium one if you’re up for spending some time with it, and a large one if you have all the time in the world. People with small houses and a smaller garden shouldn’t get either a medium or larger pup. Personally, I wouldn’t bother with a cat or any other animal after having my two companions. Pups rule!

Hmmm … dredging my memory here, I remember loving Fluke by James Herbert (about a pup that thought he was a human), and another book called Doctor Rat by William Kotzwinkle. For what it’s worth, I wrote a book called The Dog King, where Henry Lawson comes back as a ghost and retells his pup stories to a kid that desperately wants a pup. “The Loaded Dog” and “Two Dogs and a Fence” are among the ghostly retellings.