Although I was first introduced to Ann Martin’s books when my daughter was a Babysitter’s Club fan, I didn’t have the pleasure of ‘meeting’ her until I was asked to contribute a dog story to her Because of Shoe  anthology, which will come out in June. Working with her was a delight, as well as an honour. (And the book looks wonderful, too.)
Ann is the author of A Dog’s Life, Everything For a Dog, and A Corner of the Universe, which won a Newbery Honor. Look for her on Facebook (AnnMMartinAuthor) or find her author page on Scholastic’s web site: Scholastic.com. 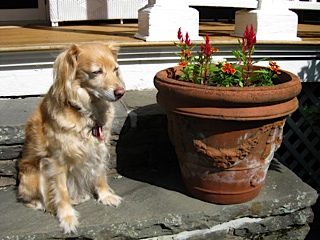 – Have any of your books been inspired by an animal?
My dog Sadie, who’s an old lady of fourteen now, was the inspiration for A Dog’s Life, which is the autobiography of a stray dog named Squirrel. Sadie wasn’t a stray herself, but she was born to a stray, and she was so shy that I used to wonder what would have happened to her if she’d been born in the wild, like her mother. Would she even have survived? That was the beginning of Squirrel’s story.
– Did you have pets as a child?
We always had pets – hamsters, gerbils, mice, fish, guinea pigs, turtles, and lots and lots of cats. But we never had a dog. So I grew up loving animals, but didn’t have a dog in my life until I adopted Sadie.
-Is Sadie your only animal companion now? How did the others get their  names?
Apart from Madame Sadie, I have three rescued cats – Gussie, Pippin, and Oliver. Gussie is a very old man – seventeen – and despite the fact that he’s a boy he was named after my friend’s Great Aunt Gussie. Pippin is four, flamboyant and a show-off, but not (sorry to have to say this) the sharpest knife in the drawer. He was named for Pippin in the musical, but not for any particular reason. And then there’s Oliver. I adopted Ollie from the SPCA two years ago. I couldn’t decide what to name him, so offered Facebook fans three possible names, they voted, and “Oliver” won.
– Any advice for people wanting pets?
A pet will bring you great joy, lots of love, and probably plenty of laughter. But remember that when you adopt a pet, you adopt it for life, and a dog can live to be fifteen years old, while a cat can live to be twenty. You’re committing to caring for your dog or cat for many years – and your pet depends on you for food, shelter, and veterinary care. Be a responsible pet owner! Also, look for a rescue pet. Check with your local shelter, or look at online rescue sites. There are rescue groups for most dog breeds. Finally . . . have your pet spayed or neutered. End pet over-population! Okay, I’ll stop talking now.
– Favorite animal books?
My two favorite animals books are The Yearling, by Marjorie Kinnan Rawlings, and Rascal, by Sterling North.
Tags: Artists and animals; author and cat; Ann Martin; Corner of the Universe, Babysitters Club; A Dog's Life; Because of Shoe