Usually when people talk about story mapping, they mean mapping out the shape of your story: how the smaller chapter peaks and cliff hangers build up to the great climax. Personally, that’s not something I can do before the first draft is done, and even then it’s more something I’m aware of than a formal, written chart. 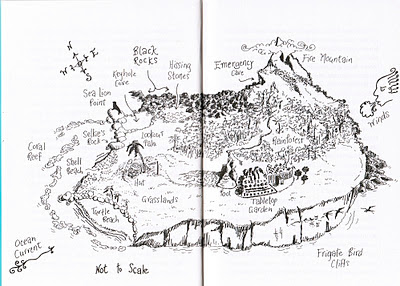 What I mean is literally drawing maps for each story. Anyone who knows me and my sense of direction might find this amusing  – but actually it’s even more important if you don’t have that natural sense of where things are and how they fit together. The map I created of Nim’s island was up on my wall the whole time I worked on the book, and later sent to Kerry Millard, the illustrator, to be prettied up for publication. (I love the antique puffy-faced winds she added! The “not to scale” was my husband’s comment, which Kerry thought was so funny she added it too.

For Raven’s Mountain (Australia)/ Facing the Mountain  (coming in February in Canada), I had large scale maps of National Parks in British Columbia, then my own drawings of the mountain, her path down it, the camp site… if you’ve got a character out in the wild, you need to know which way the sun comes up over the lake, and remember that it’s not going to set in the same place.

Today I’m drawing a temple-palace – I’m not quite sure yet which it’ll be called, though I have a feeling that  I’ll know when I work out the drawing.  It’ll take a while – drawing is another of my not-so-gifted gifts – but I learn a lot about what I need to know as I do it. I get a better feeling of the materials; I know the colour of the stone now, and it’s not what I thought it would be. It’s all part of digging yourself into the character and the story.

I can’t share these now, but here’s one I made for Raven’s mountain: a salt dough conception of the peak, to see if my idea of how it could have eroded would work.

It doesn’t have to be just for fantasy kingdoms or eroded mountains: if you’re not sure of some of the logic in your story, or your character isn’t coming to life, pick up a pencil and start doodling ideas about their home, their street, their town. If you can picture their kitchen, their bedroom and garden, you’ll know a lot more about them. You’ll probably never use those details, but knowing them will give your character greater depth, and a better chance of coming to life on the page. 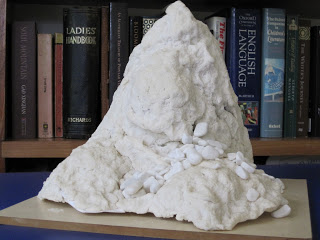 Click here to cancel reply.
Next post: The writer's curse: fear of the blank page → ← Back to all posts