I’m waiting anxiously for the advance copy of LOST! A Dog Called Bear. When I finally get it, I guess it will seem funny that it’s been lost in the mail.

However, it’ll be out, in the USA and Canada, on August 2 so readers there may see it before I do! (Australian readers, unless they win the Facebook competition, will have to wait for a compilation book to be published by Allen & Unwin next June. It will probably be called Rainbow Street Pets.)

This little book (10,000 words) has been a long time coming, as it’s the first of a series of six in the Rainbow Street Shelter series, and we wanted to have them all well underway before the first came out.
It’s published by Henry Holt and illustrated by Susan Boase.

This first story is based on the adventures of two dogs we owned at different times in our lives – both were Border Collie crosses and working dogs. Jack jumped the five foot fence when he came to live with us in Albury before we bought our first farm; he headed down the highway and jumped into the back of the first ute he saw, ending up in Yackandandah, about 25 km away. Many years later, when we moved into Rosebud for a while, Bear jumped out of the back of my husband’s ute, raced across the highway, and ran up and down the beach for a few hours. People kept telling us they’d seen him, and pointing different directions, but we never saw him. (It’s okay, we did get him back eventually!) 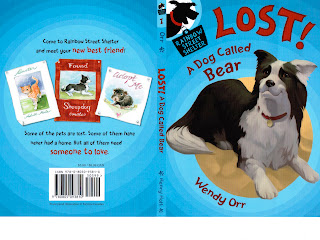