Better late than never… I promised I’d put up some pictures from the launch for Raven’s Mountain, at Robinsons Books in Frankston – and I’ve added in my talk as well.

One lovely thing about being so slow to put up this post is that several kids who bought Raven on this day have written to tell me how much they love it. Good reviews are wonderful – but nothing beats the first reactions of the readers a book’s intended for.

Being introduced by the lovely Susanne of Robinsons Books 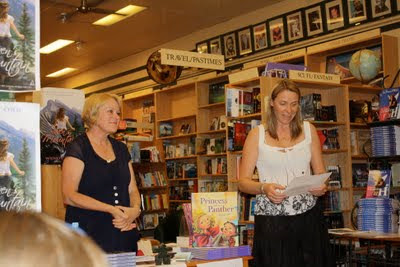 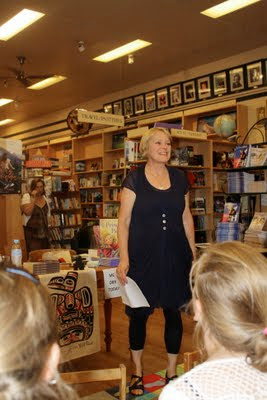 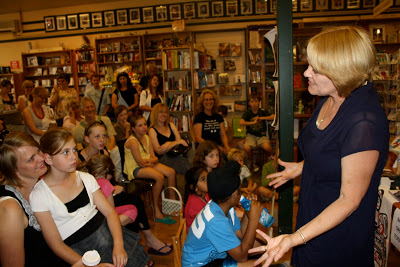 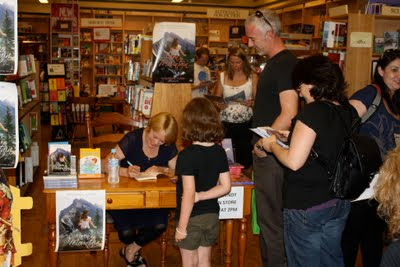 Now some of you know that about 3 years ago, I was lucky enough to have a Hollywood Red Carpet launch with Jodie Foster for the film made from my book Nim’s Island. The end of the tour for Nim’s Island was visiting my parents near Vancouver in Canada. I love the mountains there, and maybe that’s why I started thinking about when I was about twelve, and my younger sister and I climbed a mountain in Colorado with my dad and some of his friends. It was called Pikes Peak, and was just over 4000 metres high, about twice as high as Mt Kosciusko. We climbed in the summer so it was warm when we started, but the higher we went the colder it got, and the harder it was to breathe. About half way it was too cold for trees to grow, and then it was too cold for any plants except lichens – so when all of a sudden there was a hail storm, the only place we could shelter was under a big rock. There wasn’t much room, it was cold and uncomfortable – and we didn’t know how long we were going to have to stay there. So all those years later, those feelings, and that fear, went into the ‘What if?” game that writers play. “What if you were sheltering under a really big rock? What if you got stuck there?” And then the other writer’s question: “Why & how did that happen?”
In the end I let the real rock into the story too, because it made a good warning for what happened next. It’s nice to have little warnings that the reader sees, even if the character doesn’t. It’s like the creepy music in a movie – as soon as you hear it you know that person is in trouble: you want to shout at them, “Stop, go back! Something bad’s going to happen!” But they can’t hear you or the music so they keep on going, and the bad thing happens.
Even though the idea started with climbing the real Pikes Peak, that’s not the mountain I used in the story. I wanted something further from civilization, so I moved it up north to the Canadian Rockies. And once you’re up there, you’ve got bears. You might hike for two days and never see a bear ­ – but you never hike in those mountains and forget about bears. I remember going camping with my cousin and her boyfriend, lying out under the stars in our sleeping bags – so beautiful and peaceful… until the boyfriend mentioned that a grizzly bear had taken a camper right out of a tent a few weeks earlier.
So I set my little town, Jenkins Creek, about there, near the ranch where my cousin kept her horse, and put Raven’s mountain another couple of hours up the highway from there. There are lots of mountains and lakes up there – no one’s going to mind that I’ve stuck another one in.
Actually bears aren’t the only thing to be afraid of in the Canadian wilderness. There aren’t many snakes up that far north – rattle snakes live further south – but you’ve still got cougars, bobcats, coyotes and wolves. So apart from the hail shelter rock, the only other true story in the book is:
In the end we turned Coyote Girl into a game. All through July, the three of us walked around the block after dinner, as late as we were allowed, howling like coyotes. We imagined people running to lock their doors so the wild animals couldn’t get in. We felt wicked, and brave.
But one Sunday Jess’s family took us for a picnic at the river park. We wandered away from the flat greenness to explore the ravine: it was wild, steep and bushy. We crouch-ran through it, hiding and howling.
Somewhere down the river, a cougar screamed.
We didn’t play the howling game much after that.
And because people always wonder, especially once I’ve said that I’ve used these two ideas from my childhood, whether I’m Raven: no. If anyone in the book is me, it’s her friend Jess, the bossy one who wrote the Coyote Girl play and organizes the howling game. Raven’s actually a very normal kid, except for the bad luck of being named after a black bird when she’s got red hair – and that’s her mom’s fault, not hers. This is what Raven says about herself and her friends:
We’re all squished on together, Jess in front because she’s smallest, Amelia in back because she’s tallest, me in the middle because that’s the way we are. I’m not as smart as Jess or as good at sport as Amelia: I’m the middle bit that joins two long sides of a triangle, practicing handstands with Amelia and writing plays with Jess.
This is why Raven’s different from Nim. Nim was raised on her island; Nim is incredibly brave and resourceful, but she’s actually been raised to be that way. Raven’s grown up in a safe, small town; family picnics at the river are about as far into the wilderness as she’s ever been before.  So I actually think Raven’s even braver, because everything she has to do is so entirely out of the world she’s lived in.
Tags: Booktopia; Raven's Mountain review; kids books children's literature, fear and bravery in children's books; Robinsons Books, launch, Raven's Mountain