Soup Blog
I was interviewed a little while ago by Rebecca Newman for Alphabet Soup magazine; the full interview is on their blog, as it couldn’t all be fitted into the print magazine. For an online look at this great magazine for kids 0f 6 to 12 who love reading and writing, go to: http://www.alphabetsoup.net.au/
Meanwhile, here’s the interview:
1. Where do you live?
On a hill near the sea on the Mornington Peninsula, south of Melbourne.
2. What made you become a writer?
I love stories and books so much that I always knew I wanted to write them. My dad used to tell us crazy stories that he made up, and my mum read us wonderful books for bedtime stories, so wanting to write books never seemed like a strange thing to do.
3. What do you like to do when you are not writing?
Reading, going for walks (especially on the beach or in the bush, and especially with my dog), seeing my friends and family, doing tai chi, and travelling.
4. Was it easy to get your first book published?
I was quite lucky with my first book (Amanda’s Dinosaur) because it won a competition, and the prize was having it published. The next few were harder!
5. What was your favourite book as a child?
At different ages: Winnie the Pooh; My Son in Law the Hippopotamus; Anne of Green Gables; Swallows and Amazons; Little Women; The Eagle of the Ninth.
6. Where do you get your ideas?
I’m often not sure where an idea has come from until I’ve finished the first draft. Sometimes it’s from something that has happened in my life, and sometimes it’s a crazy sort of thought—which of course has still probably happened from something I’ve seen or heard or experienced in some way. Sometimes it might be by asking ‘What if?’ about something that’s happened. Of course you need a lot of ideas to make a whole book—one idea starts it, but then you need more for how a character looks or acts, or what happens in chapter 3, and what’s exciting in chapter 5, or how everything all comes together in the end … I sometimes think that there’s a little bit of magic in how all these different ideas come together.
7. Do you prefer to write with a pen in a notebook, or on the computer?
On the computer. I use a pen to make notes in a notebook with a pen; often one book will have its own notebook and I jot down my thoughts or try to work something out. But once I start writing the story, I always use the computer. (For one thing my handwriting is so messy that writing a whole story with a pen would be too tiring— and even worse, I often can’t read my writing!)
8. What do you love best about being a writer?
Living inside a story and playing with it till it comes out right.
9. Of your own books, do you have a favourite?
It’s very hard to choose a favourite, because they’re like friends or pets. I sometimes think Ark in the Park is my favourite, because when I read it there are still no words I want to change or lines I’d like to rewrite. But Nim has been my favourite character for a while—except that now Raven’s Mountain is out, in many ways that’s my favourite, because I always feel very protective about a new character about to face world. So that might be why Raven is my favourite character right now. 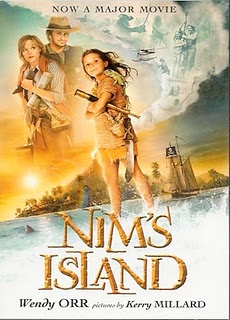 10. Are you working on a book at the moment? Can you tell us anything about it?
I’m always working on several books at a time. I’ve just finished Raven’s Mountain, which was out in February. The short blurb would be, ‘Three people go up a mountain; one comes down.’ It’s an adventure story about a girl named Raven who goes mountain climbing with her older sister and stepdad—but when there’s a rockfall and the others are trapped, Raven has to face the wilderness alone to try to save them, and herself.
I’m also working on a series of books set in The Rainbow Street Animal Shelter. I’m doing these with an American publisher; in Australia the stories will most likely be collected into one or two books. I’ve just finished editing the second book, MISSING: A Cat Called Buster, and now am waiting for my editor to work on the third book while I rewrite the fourth (FREE: A Lion Called Kiki).
There are also several other books at various stages on my computer and in my head!
11. You write picture books, books for primary school aged kids, and young adult books. Do you have a favourite age group to write for?
If I had to choose one age group, it would be primary school or middle grade readers. But I’m very glad that I can skip around and play with a picture book or plan an adult novel in between.

12. How do you know if an idea is best for a picture book, a middle grade book or a young adult book?
That’s part of the mystery of writing that I don’t understand. As an idea starts to grow into my mind, it shows me the shape the book will be, so that by the time I’m ready to write it, it’s obvious what sort of story it wants to be.
13. Do you have any advice for young writers?
Just keep on writing! Have fun with it; try writing different types of stories with different types of characters. Remember that the first person you’re writing for is yourself—you need to love what you’re doing. When you’ve finished, read it and see if there are any parts that are a bit boring, or don’t make sense—pretend you’re a teacher with a big red pen, be brave and mark everything that isn’t good. Ask yourself if that bit needs to be in the story. If it doesn’t—delete it. If it does—make it better. Does it make you laugh, or cry, or hold your breath? Keep on rereading and rewriting till you’re happy with everything in your story.
And don’t forget to read, and experiment with different types of books. Writers need to see how other writers work—but most of all, we need to love stories.
Tags: Alphabet Soup magazine; Wendy Orr interview, Wendy Orr on Writing

Click here to cancel reply.
Next post: Raven's Mountain on Speech Pathology Australia Awards Shortlist → ← Back to all posts