My personal 2c worth on Borders and Angus & Robertson

No matter how much I prefer the independent bookshops, it’s still sad to see the demise of Borders and Angus& Robertson. A friend phoned from Queensland the other day to ask if I could send her Raven’s Mountain directly, as A&R is the only bookshop she can access (she doesn’t have internet) and they didn’t know if their suppliers would deliver the book to them. Sometimes a bad bookshop is better than none. (And yes, the chains are quite likely the reason that there isn’t an independent there!)

We don’t need one more blog on the multi reasons for their failure, or their generally poor service and lack of knowledge about books. (Another friend, searching Melbourne Borders for a biography of Miles Franklin, was asked what ‘he was famous for.’) But I also remember the first buzz of being surrounded by so many books  – and the buzz of seeing the beautiful poster they produced for Nim’s Island. 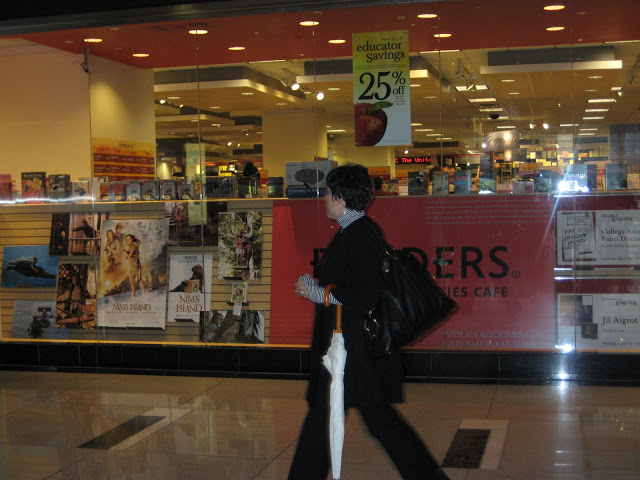 Very exciting to see your book displayed in the front window of a huge chain store, you’d think! And it would have been – except if you look closely, the posters are all of the  movie. The book doesn’t actually seem to be in sight (the ones in the children’s book department were equally well hidden).  As this was taken a few weeks before the movie came out, the DVD’s would be about six months off, so it seemed a bit early to be advertising them.

Writing and publishing books is a business. It shouldn’t be a surprise that selling them is too. I don’t think the end of these stores means that books are dead.

Click here to cancel reply.
Next post: Invitation to Launch of Raven's Mountain → ← Back to all posts