Two and a half years ago, flying home from the excitement of the Nim’s Island premierre tour, images for a new story started creeping into my mind. There was a girl prowling desperately around a locked, vacant cabin (no idea where that image came from!); there was a memory of breathlessness at 10,000 feet when climbing a mountain with my father and sister, and an image of sheltering from hail under a big rock further up that same mountain. Somehow the story grew from those three thoughts, not always in the way I expected. It changed form and structure. Characters grew, and developed their own personalities – again, not always the ones I expected. The story fell into place, rewrite after rewrite, until it seemed like the only logical way it could have happened. The title flapped back and forth between my editor and me until it was finally settled; Raven’s Mountain.

So on Tuesday morning I finished proof reading, (including a major rewrite of one chapter, which my editor was kind enough to agree to, even though you’re really supposed to have finished rewriting by the!). I dropped it into an Express envelop and sent it back to my editor at Allen & Unwin. It’ll be released in February.

Now I’m taking down the maps I’ve drawn for the story, that have been on the back of my office door for nearly two years. I’ve taken the photos of bears and mountains off my screensaver, though the salt dough mountain top is still on top of my bookshelf. And I’ve spent some quiet time saying goodbye to Raven, the girl I’ve grown to know and love. Until February, she’s in a bit of limbo, but then she’ll fly free to meet the world, and not really belong to me any more. 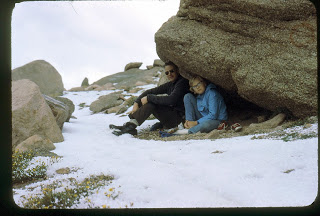 Here’s one of the images that inspired the story.