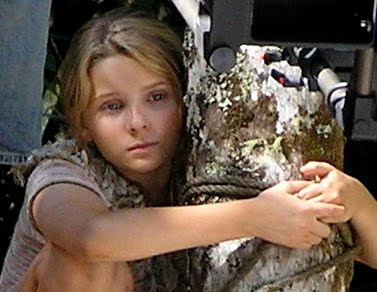 This is the piece I wrote to start off the Premier’s Reading Challenge blog in The Age newspaper http://www.education.theage.com.au/blog

Characters feel so real to me it’s sometimes hard to remember that I’ve made them up! But they usually start with an image or an idea, and then asking myself “why?” or “what if…”, so they change as the story becomes clearer in my head. For Nim’s Island, the original idea was letters between a crabby author who thinks she’s too important to write about a little girl, and the girl whose life is much more interesting than the famous author’s.
So, why was her life exciting? I decided she was alone on an island. That meant she needed to be independent, brave and resourceful. Then, when I started to write, I remembered a story I’d written when I was nine, about a girl running away from an orphanage to live on an island. She loved animals, and finding and making things to survive in the wild. I knew that was my Nim!
For most people now, Nim probably looks and sounds like Abigail Breslin, because once a book becomes a film, the characters are shaped by the actors (and screenwriters, directors, make-up artists…) That can be hard for readers, and authors, because we all have our own ideas of what characters look like. Luckily for me, Abbie played Nim very much as I saw her.

Click here to cancel reply.
Next post: Things You Learn – Talking to people about teaching and learning�|� → ← Back to all posts