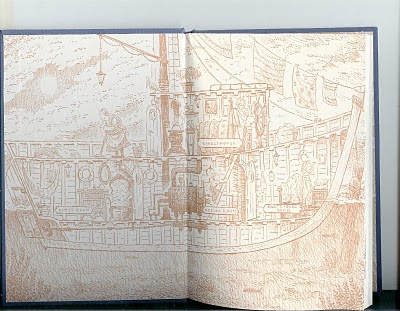 Mokie and Bik Go to Sea (that’s the front end paper above) comes out tomorrow, in the USA and Canada. It’s always a bit of a funny feeling to have a book coming out and not be able to celebrate it where I live. If I’d thought of it in time, I could have had a skype launch! As it is, I will just have to wish it bon voyage right here.

The book’s been a long time coming; it was originally meant to appear a year after Mokie and Bik, but unfortunately the illustrator, Jonathan Bean, has had health problems and the publication had to be delayed to allow him time to finish the art work. Like the first book, the art has been worth the wait – and I do hope he’s recovering well now. He’s an incredibly talented young man. (I loved his picture book Night.)

One story in this book overlaps with the Australian version of Mokie and BIk, illustrated by Beth Norling. The story of the boat drifting out to the mouth of the harbour, and being brought in safely to the fuel barge by five year old Bik, is quite true. It was obviously a dramatic and traumatic event in the twins’ lives, and I wanted to build up to it as I did in this book.
(Their Dad jumping off to chase the dog who was chasing a cat down the wharf is also true – in fact that story is pretty much as Dad told it to me.)

And, if by any chance anyone reading this knows my dad and his sister Anne, please don’t mention that the book is out. (How to keep a secret… tell it to cyberspace!) I’ll be seeing them for their 80th birthday in July, and want to keep the book till then, as well as the CD of the 3rd book, Mokie and Bik in a House-on-the-Ground. It is unlikely to be published as a book now, but I have recorded it as an audio, which you can hear at the Macmillan site.

Click here to cancel reply.
Next post: Launching Mokie & Bik go to Sea → ← Back to all posts