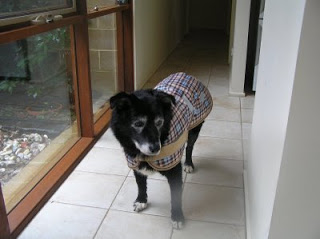 I started this blog intending it to be strictly about writing, but sometimes life interferes – actually, it interferes a lot: being a full time writer, it’s all pretty interwoven. And so this week,nothing in my writing life could possibly be as important as personal side, with the death of Bear, our (mostly) border collie.

He was 16 and a half, which is certainly a good age for any dog – especially one who started life as a working dog. He’d nearly died at about six, when he was run over by a tractor, and left with damage to his back and hips.

It didn’t slow him down. Right up to the day he died, he had two walks a day, usually just a kilometre each time, though he’d still occasionally request a longer loop of two km (about a mile). He was well known in the district, and when we walked past a cafe after school, little girls would run out to walk him up and down the street.

Of course, part of the reason that he was well known was that until very recently he was an escape artist, and having decided that if he’d moved off the farm, he might as well enjoy the benefits of suburban life, he took himself off to the cafes at any opportunity – and if they didn’t come out immediately to offer him treats, he’d stand at their door and bark until they did.

Reflecting on his life, I realise that I’d nearly forgotten what a naughty, destructive dog he was when young. He loved teasing our other pets, and would take the dachshund’s bone and jump over the fence with it; if anyone other than my husband was milking the cows, Bear would drive them to the dairy at a gallop, because it was so much more fun than the sedate pace that left with milk in their udders. Someone looking after the farm for us once told us that Bear had “told him” that he always sat on the tractor driver’s lap. (Bear lied.) He panicked easily, and completely destroyed the inside of my husband’s ute when left in it once; later he destroyed all the doors in our new house. And yet when the friend walking him was attacked by a pit bull, Bear rushed in front of her and took the attack, his life being saved only by the metal clip and ring on his collar.

So, like many humans, he was complex mix of contradictions, and he was lucky enough to mature and age gradually and gracefully. His legs were becoming more stiff, he was nearly completely deaf and had begun to hate any variation in his routine (barking if his dinner was 5 minutes late, or if I was still in my office after dark.) But he was still active, alert and enjoying life. Death is the logical, natural, and only conclusion to life, and I know that he probably would have preferred to have gone suddenly, as he did, instead of becoming increasingly frail. But just as one feels with an elderly relative in the same situation – I wish we’d had a few more months.

Tags: death of a pet