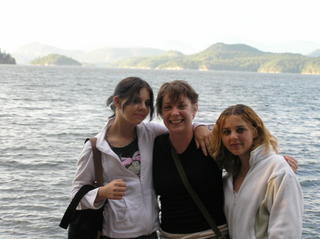 My daughter Susan in the middle, with my nieces Chelsea on the right and Alana on the left.

Visiting family is always the best part of a trip, and a big birthday party or two makes it even better. We celebrated my mom’s birthday, and then my dad and his twin sister, the models for the characters Mokie and Bik, turned 75! Although the book (named, you guessed it: MOKIE AND BIK) won’t be out till July 2006 in Australia, and a bit later in the USA, I was able to show them some wonderful roughs (early illustrations) from Jonathan, the illustrator for the Henry Holt (American) edition. They were thrilled! After all, they’d had a very unusual childhood, living on a boat in Vancouver Harbour, but it’s still a strange feeling to see your life depicted in fiction. (Although, if anything, in this story, I’ve had to tame the facts down slightly to make the fiction even vaguely believable…)

It was a great time to do more research for further Mokie and Bik books, as the more we talked, looked through pictures and walked on beaches, more stories seemed to turn up. Which of course is what stories tend to do whenever we’re open to hearing them.

Of course walking on beaches can be just plain fun too – especially when we met up with my brother and his family on beautiful Quadra Island. The sunset there was the most beautiful one I’ve ever seen (and the salmon the most delicious!)